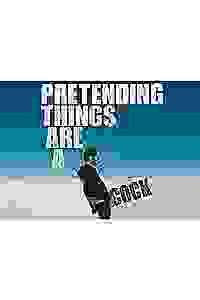 View in admin
Pretending Things are a Cock
NYC: Soho/Tribeca
69
Score it Scored!

Pretending Things are a Cock NYC Reviews and Tickets

This comedy show is the product of Jon Bennett’s three years of global wandering, and combines the artistic, phallic-filled photographic display with hilarious and surprisingly heart-wrenching tales from his life.

This Just for Laughs award-nominated show for Best Comedy has now been performed to sell-out audiences and critical acclaim world wide. The show has toured to some of the biggest festivals in the world including the renowned Edinburgh Fringe (2012) and Just for Laughs Zoofest in Montreal (2013).

A unique stand-up experience, PTAAC is a hilarious, but also strangely affecting pot-holed journey into the idiosyncratic world of Jon Bennett.

See it if you'd enjoy a quick trip through near 4 years of wandering the world to take photos that place all things at zipper level with good stories.

Don't see it if you are looking for a play as this is a comical one man performance with visuals and some stories of his life. the projections pass quickly.

See it if u think u'll be tickled by a PowerPoint presentation by an Aussie bro mugging & posing with various objects as an extension of his manhood.

See it if Great storytelling with a interesting narrative causing much laughter from the audience.

Don't see it if You are offended by the topic.

See it if you want a one man show about a guy who takes pictures of things as his cock. His stories are truly great. The schtick got old real fast.

Don't see it if You want something more than pictures of things as a cock. Against, stories were great, but the idea got old pretty fast.

See it if You saw the title and thought, "Hmm, I think I would like this show." It very much lives up to its title.

Don't see it if You have a heavy dislike of phallic and scatalogical humor. Though I usually dislike those sorts of things and found this quite funny. Read more

See it if You’re up for an hour+ lecture with travelogue slides of stand-in penis poses worldwide, almost salvaged by decent storytelling.

Don't see it if Not interested in lectures accompanied by juvenile slides or some very personal, at times harrowing stories of growing up in New Zealand. Read more

Don't see it if you don’t like one Millennial male narrative, or prefer tradition theatre with larger cast, set, audience, or resonant theme, or musicals

See it if You want to see a storytelling solo show with cheeky humor.

Don't see it if You want to see solo show where the perform plays a character. Read more