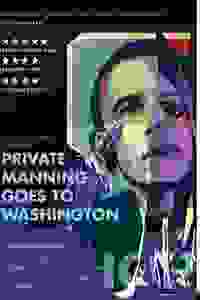 After a recent run at the Edinburgh Fringe Festival, the Representatives presents a revised version of this drama, a play within a play imagining a secret meeting between Army whistle-blower Manning and President Obama.

In December 2010, long before his suicide, hacktivist Aaron Swartz requested information from the U.S. government about the treatment of Chelsea Manning, the soldier who would be found guilty of leaking classified documents to Wikileaks. Playwright Stan Richardson uses this fact as a springboard to imagine Swartz creating a piece of theatrical activism intended to free Manning. 'Private Manning Goes to Washington' is a timely and trenchant new play about the power of theatre to create empathy, understanding, and justice in an age of virtual realities and manufactured truths.

Don't see it if the gutwrenching brutality of war and its impact on idividuals is of little interest don't see this show.

Don't see it if Sure

"It’s an intriguing concept, and one very much in sync with the times. Alas, 'Private Manning' is surprisingly uninvolving, despite hitting so many hot buttons at once...The play-within-the-play scenes meander, lacking dialectical fire between the fictionalized pair...Aaron is the most interesting character here, but Mr. Richardson fails to dramatize what drove—and tormented—him. We’ll just have to wait longer for a good show about an internet savant."
Read more

"'Private Manning Goes to Washington' covers a lot of territory during its hour-long running time, much of it requiring, by necessity, the kind of background information that will allow the audience to grasp the intricacies of Manning's situation. The play cannot help but border on the polemic, but the subject matter is never less than intriguing. Both the performances and the directing are polished to a gleam."
Read more

"Wonderfully acted and imaginatively presented...Richardson very skillfully blends the facts of the case with dramatic license to create an entertaining and provocative scenario. Treason versus conscience is evenhandedly explored. At times the play is overly self-conscious but is ultimately compelling...The actors have tremendous chemistry and their naturalness energizes this often polemical material...Its highly theatricalized mixture of documentary and drama is quite effective."
Read more

"Avoiding preaching, 'Private Manning Goes to Washington' simply demands we know the truth...Playwright Stan Richardson should be applauded for his mastery of the many complicated layers of story (kudos also to dramaturg Jordan Schildcrout)...The impact of the power dynamic between the two actors does somewhat flatten the complexity of these characters, though the script does enough work to expose everyone’s flaws ensuring they retain their humanity."
Read more

"The relationship between Swartz and Billy is forced and underdeveloped because their backstories lack depth...Richardson takes pieces of each character’s life and weaves them together in an effort to make points about injustice and acceptance. It can all land as disjointed, sudden and unripe at times...The tone of this production remains safely moderate, and it chooses to not be a heavily politicized piece that could isolate itself from some audiences."
Read more

"Whether you applaud or detest Manning, the play delivers an important message about the role of whistle-blowers in a free society...Our only critique is that the dialogue feels more dense with (apparent) facts than two people would normally express during a real conversation...We'd definitely encourage you to catch 'Private Manning'...You'll be entertained, for sure, and if you haven't spent much time thinking about whistle-blowing before, you certainly will after the show."
Read more

"This intelligent, thoughtful play couldn’t be more urgent or topical. Its play-within-a-play construction is a little tricksy, and it often feels a mite earnest. It really needs longer than its one-hour running time to develop…It raises fascinating questions about information, who owns it, and what you should do with it...While the performances of Ford and Steiner keep the thing afloat, there are times when it feels as if it might sink under the weight of its own good intentions."
Read more

"The play presents a strange, yet absorbing combination of characters that allows for natural exposition and leads to Aaron commissioning a play...Before the first draft is complete, Aaron commits suicide while under indictment for data theft. Oddly, it's at this point that the play loses some of its power. The gear change shifts the focus and the final notes are dramatically unsatisfying, even if they are morally on-target."
Read more