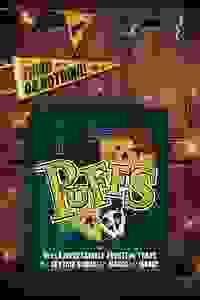 Puffs, or: Seven Increasingly Eventful Years at a Certain School of Magic and Magic (NYC) NYC Reviews and Tickets

For years a certain boy wizard went to Wizard School. This, however, is not his story. This is the story of the Puffs...who just happened to be there too. A play for anyone who has never been destined to save the world.

'Puffs, or: Seven Increasingly Eventful Years at a Certain School of Magic & Magic' is a Potter-inspired comedy for anyone who has ever felt like a secondary character in someone else’s story. The play gives you a fresh look at a familiar adventure from the perspective of three new heroes just trying to make it through magic school. Alongside them are the Puffs, a group of well-meaning, loyal rejects with a thing for badgers. Their epic journey takes the classic story to new places and reimagines what a boy wizard hero can be.

See it if you love Harry Potter. If not, you'll be lost. Very broad and hammy, but it works. Modest production values, but inventive staging.

Don't see it if you want depth. This is purely for fun; a clever send-up. Could use some trimming; it was almost two hours with no intermission. Read more

See it if you must be familiar with Harry Potter lore to understand this very funny parody. Creative & fast paced.

Don't see it if if you didn't read or seen Harry Potter, this will make no sense to you.

70
Entertaining, Funny, Silly, Over the top

See it if You are a fan of Harry Potter and enjoy spoofy/satire shows. It's very over the top, silly and fun.

See it if If your a Harry Potter fan. If you like to laugh.

Don't see it if If you don't know the Harry Potter books or if you know them and did not like either books or Movies.

See it if A quality Potter world spoof for sure. Very funny. non-stop.

Don't see it if If you don't know or like all things Potter... you won't get it.

See it if Great for Potter super-fans, who attended in abundance. Young-adult story. Good staging. Best scene was the soliloquy about throw pillows.

Don't see it if Despite having read all the books, I didn’t get all the jokes.

See it if you are mad about Harry! While he is not the star, his world is depicted by a large, talented and flexible cast with imaginative staging

Don't see it if you do not know the Harry Potter stories and characters. Quick and constant action means missing out if you are not knowledgable.

See it if If you like Harry Potter and cannot get to tickets to the see the Harry on Broadway.

Don't see it if Some parts are not for young kids.

" A funny and affectionate homage to J.K. Rowling’s world of wiz kids...Some of the jokes will be lost on those with no knowledge of the films or books. But even 'Potter' virgins will enjoy the show’s witty wordplay and well-executed physical comedy. At times, the pacing is so frenetic that jokes can’t find a place to land, but there’s heart as well as humor here...Like its main characters, 'Puffs' illustrates the heights to which underdogs can soar."
Read more

"'Puffs' zips through the highlights of all seven books...'Puffs' feels engineered specifically to delight 'Harry Potter' diehards, and for the most part it succeeds—not every joke lands, but it makes up for it any misses with its high level of reverence for the Potter-verse...Even if this venture is not the bravest or the smartest, it’s got its heart is firmly in the right place, and audiences will likely leave charmed."
Read more

"Most of the time, it's a pure, and purely enjoyable, lark...Cox's treatment is dispensed with respect, admiration, and even love for the originals, which makes the jokes funnier and the production even more endearing...The cast is all pitched at just the right level of confused caffeination, and give in to neither pure mimicry nor the inclination to blaze their own original trails. Moon and Belton are dynamic comic leads that wring every laugh from their fish-out-of-water characters."
Read more

“How much you enjoy Matt Cox's ‘Puffs, or: Seven Increasingly Eventful Years at a Certain School of Magic and Magic’ may depend on how well you know the Harry Potter books and the movies that followed. This mild satire tells an alternate but parallel story of the famous wizarding school for the members of the fourth house called The Puffs. The show attempts to cover many of the same events of all seven years in the 1990's when Harry, Hermione and Ron attended the school.”
Read more

"In order to get through seven years in '90-ish' minutes, the action must move quickly, and thanks to Kristin McCarthy Parker’s seamless direction, it does. But 'Puffs' is more than just non-stop crazy action with a bunch of jokes for 'Potter' fans. Cox and Parker understand that sometimes comedy takes time, and they make smart choices about when to speed through the story, and when to slow down and build a joke for a better payoff. The action is never muddy or confusing."
Read more

"Cox’s script pummels with multiple gags a minute, which can be exhausting in a show that runs just over ninety minutes...The story barely has room to breathe as jokes and physical comedy bits are thrown to the back of the house with abandon...Shaky moments and some jokes that don’t land aside, it concludes with a mixture and cynicism and warmth that sells the concept. Here is a work of underground theater that often beautifully complements its mainstream counterpart."
Read more

"Bigger sets and impressive puppets add some flair but the joy of revisiting the well-loved 'Puffs' is what is sure to keep the show going for some time...Cox’s script is mostly the same from the previous production and sports the same weaknesses and strengths...Parker continues to run a tight ship with a production that mostly moves rapidly but also takes time to breathe...It is worth noting that the cast’s increased familiarity with their roles has made them even more memorable."
Read more

"A way for fans of the books and movies to revisit their favorite place from a new perspective. And it can be appreciated on both a macro and a micro level...The writing by Matt Cox is crisp, funny and on point, director Kristin McCarthy Parker keeps the pace rolling along at a good clip, and the cast is uniformly excellent. If you’re a fan on any level, go and enjoy...If you don’t know from the magical world of 'Harry Potter,' you’re probably going to want to skip it."
Read more