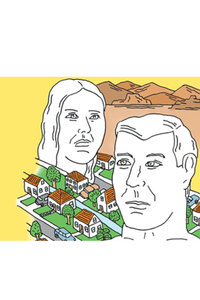 We never meet young Richie and Lonna, whose marriage is on the rocks. But miles and miles away, in the affluent Southwestern suburb where Richie's parents live, that couple’s separation is disturbing the tranquility of a community they barely know. In this comedy, the residents of Rancho Viejo drift from one gathering to the next, wrestling life’s grandest themes—set against the lustful, yearning strains of a distant bolero. Featuring Tony nominee Mare Winningham and directed by Daniel Aukin.

See it if Older suburbanites faced with choices about what to sacrifice in order to maintain their personal and communal relationships.

Don't see it if You don't enjoy a slow pace that allows for rich character development. There are some confusing surrealistic elements. Read more

See it if You enjoy great acting in a interesting and humorous play that is also quite strange. I really enjoyed it and did not find it too long

Don't see it if You don't want to see strange characters talking for three hours. It's a long show. 3 hours with two intermissions. Read more

"Sweet and scary, lackadaisical and hypnotic…A melancholy and often very funny portrait of four cusp-of-Medicare couples...Life often seems to be set on pause during the three leisurely, impeccably acted hours…'Rancho Viejo' has been directed with a poet’s appreciation for rhythm and emphasis by Daniel Aukin…Only in the last section does ‘Rancho Viejo’ start to feel a little too tidy…But the show’s final scene is a haunting beauty, a perfect balance of the everyday and the eternal."
Read more

"LeFranc blends bold formalist tricks with deep empathy for his characters’ frailties…At times 'Rancho' feels like a deadpan suburban comedy of manners in slow motion…Semi-absurdist tactics could be deadly with mediocre actors, but Aukin’s immaculate production shines with a smashing cast. The play is consistently funny...'Rancho Viejo' may seem oddly constructed and furnished, but it’s magnificently strange and welcoming once you get through the door."
Read more

"Simultaneously stylish and frustrating…While some viewers will undoubtedly hail the play as a brilliant encapsulation of the human condition, even more are likely walk away feeling like their time has been wasted...Everyone in the cast excels at making this a watchable three-act nothing…Aukin is never able to fully resolve the problem of a script that is sarcastically self-aware while also calling for realistic performances...It all feels fashionable, sophisticated and incredibly safe."
Read more

"Dan LeFranc's 'Rancho Viejo,' now receiving its world premiere in a handsome Playwrights Horizons production featuring a terrific cast, is one of those three-hour long plays that may find you tempted to flip through your program at any time for a clue as to what the heck is going on…Theatregoers have been discussing the meaning of ‘Waiting for Godot’ for over half a century. Discussions of the meaning of 'Rancho Viejo' shouldn't take up more than half a minute."
Read more

"This kind of comedy needs especially delicate handling, which Daniel Aukin provides; his deft touch is especially welcome, because 'Rancho Viejo' isn't without its problems. A three-act play running three hours, it is much longer than it needs to be...You have to admire LeFranc's skill at spinning a kind of philosophical wonder, mixed with a touch of existential dread, out of the kind of empty chatter that so many people indulge over drinks and snacks."
Read more

"A fascinating but severely overdrawn evening…This is a story that should tell itself and, in the best scenes, does…Unfortunately, this is not enough for either LeFranc or his director. They've piled on so much additional 'color,' 'content,' and 'plot' that the underlying, moving tale of contemporary cultural alienation must fight for its life during every single second of the play...By the final act, which is given over entirely to hyperinflated minutiae, you all but give up on it."
Read more

"Running three hours, LeFranc’s play doesn’t have the feel of an epic or a major opus, but it is wisely observed and engaging. The tone is simultaneously comic and somber...The dialogue is a marvelous blend of the realistic and mundane...Besides realizing such rich performances from the cast, director Daniel Aukin has also masterfully coordinated the many presentational details into a cohesive production. Aukin’s staging has successfully realized the play on every level."
Read more

"Like Buñuel but with a softer touch, LeFranc skewers the comfortably middle class, whose lives are as fungible as their houses…The usually excellent Winningham is completely believable but just a little bit whinier than one might wish…'Rancho Viejo' holds up surprisingly well given its three-hour length. Its low-key humor keeps popping up where it’s least expected. While never gripping, it never loses us either."
Read more

"I found much in the play challenged my expectations of an engrossing, funny evening. Sure, Aukin and his crafts team nicely captured LeFranc's realistic surface as well as the surrealism underneath. And Blum and Winningham are terrific...But ‘Rancho Viejo's’ slow-building combination of super realism and its more absurdist underpinnings don't merge smoothly or all that meaningfully…The first two acts leave us with as many unsatisfactorily addressed questions as the last."
Read more

"The cast is so solid. You may not warm to the characters, but the actors are true north on delivering them…There are nifty, and telling, small pieces of business...For all the struggle for meaning, the play’s resolution is a downer…The production makes a big demand. Running time is three hours with two intermissions…The first two acts here seem interminable but—stay with me here—perhaps they were intended to underscore the tedium of life at Rancho Viejo. In that, they succeeded."
Read more

"Beneath his goofy spoofing of a group of lazy-minded suburbanites, LeFranc has tucked some big layers of melancholy and some unsettling hints of menace…LeFranc develops this conflict for over three hours. It’s a long haul. Still, there’s something intriguing in LeFranc’s unsophisticated and sometimes outright dopey characters…It helps immensely, though, that the cast is so talented and watchable...Winningham gives the production an achingly real and affecting center."
Read more

"Everyone else seemed to find this play hilarious…Although I wasn’t missing the ‘joke,’ I found the play much too distressing to ‘LOL’. The cast is perfect in their comic delivery, each delivering with an exacting characterization…I could go on about each and every one…All wonderful, seasoned professionals, playing the words written perfectly…I just wish there was a point to all the words they were saying to each other, or that the play was as good as this ensemble."
Read more

"The understated performances evoked by this strange, three-act exploration of suburban ennui are halting, sad, and funny…LeFranc is determined to give us an accurate depiction of people like us and is invested in the idea that we’ll discover something of meaning or use, even if there probably isn’t all that much to find. Whether or not you’re okay with the empty landscape at the end of the tunnel is – admirably on a formal level, but riskily on an emotional one – left up to you."
Read more

"Gently directed by Daniel Aukin, this three-hour dark comedy is not for those with short attention spans...That said, 'Rancho Viejo' has real stuff on its mind, impeccable performances, some good laughs, and more than a few touching moments...Still, 'Rancho Viejo' is a difficult show to recommend. It’s not quite strange enough to recall Pinter nor funny enough to conjure Beckett...The play seems helplessly in search of a conclusion and the final one is too tidy a stretch."
Read more

"One feels tempted to compare 'Rancho Viejo' to 'The Flick'...Both plays take their time to offer small details about everyday life and emotions that feel well observed, both have moments of quiet amusement, and both, despite extraordinary casts and fine direction, are probably better reads than physical excursions for many theatergoers...There’s an absurdist and nihilist bent to ‘Rancho Viejo.’ It’s not surprising that LeFranc has expressed his admiration for Samuel Beckett."
Read more

“A needlessly long play...with two intermissions that give playgoers ample opportunity to leave...'Rancho Viejo' occasionally attempts to introduce meaningful discourse into its dialogue, including references to the effect of art on people's lives, and there are scattered bits of amusing banality that highlight LeFranc's take on the emptiness of his characters' existence. These, though, mostly amount to window dressing on a play that takes a long time to say a lot about very little.”
Read more

"Three hours of my life I will never get back and I don’t understand why this play was written…Nothing happens, characters do insane things…Nobody in this cast seems to care about acting...Director Daniel Aukin does nothing to make this piece go faster and sitting in the theatre is torture! If I wasn’t reviewing, I would have left after the first act as many did…’Rancho Viejo’ seems more like episodes of a really bad sitcom and at least with that you can turn the TV off."
Read more

"LeFranc’s clever and courageous point is that happiness, unhappiness and everything in between are present in the small moments of life...Three hours is nothing when a script is so funny and so true as to how most people conduct themselves...An additional boost is Daniel Aukin’s steady direction of the game cast...This ensemble rates high for its grasp of behaviors that we all catch ourselves in more often than we like to admit...I’m a total sucker for 'Rancho Viejo.'"
Read more

"Is this not a living room at all but a communal space or clubhouse that’s meant to signal a geriatric 'Friends'-type living situation? Daniel Aukin’s lax direction keeps us guessing...In time, we learn that the set functions as several characters’ living rooms...This realization, when it comes, is a true disappointment...The only real character development is the neighbors’ ever-deepening lack of interest in Pete and Mary."
Read more

"The play runs too long and has an entire scene in which a character speaks Spanish that is frustratingly time-wasting for anyone who doesn’t understand the language. In Act III, things get weird in scenes in a darkened wilderness. By the end, Pete and Mary have been tentatively accepted into the group. Yet, after negotiating their assimilation, LeFranc ends the play on a tentative note for the couple, suggesting that the process of interacting with other people is a never-ending negotiation."
Read more

"The most compulsive theatrical viewing that sees three hours pass by in a flash of glorious agony...There is so much meat in LeFranc’s homemade tamale that you want to eat it all over again, get the recipe, and invite all your friends over...I feel I could write a dissertation on the work and how the creative team and cast inhabited this insightful play with such self-scrutiny and tangible transformations. It’s a big work, it has a giant cerebral cortex and an urgent heartbeat."
Read more

"Awful, with a capital 'A'. Underlined three times…What was it, you ask? The material…’Rancho Viejo’ comes from some deep, dark, mysterious place that should never have been explored. The characters are uninteresting, and mysteriously underdeveloped…The dialogue is stilted, slow, and awkward. The conversations are ‘slit-your-wrists’ banal and insipid…Despite the deep deficit in the material, the actors were magnificent…Save yourself from eternal damnation and stay home."
Read more