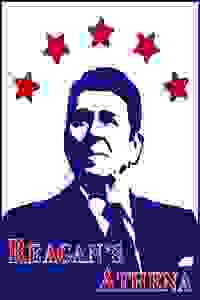 Part of FringeNYC: 1984: Ronnie's in trouble! He's smacked with Nancy's astrology, Iran-Contra and Nora Astorga! Who the hell is Nora Astorga you ask? Ask Jeane Kirkpatrick! Come see the Battle of the "Amazionian Bitches"

FROM THE ARTIST:
"A hilarious romp with Ronnie and Jeane!"

"1984. Iran-Contra gets Ronnie into hot water! Jeane to the rescue! But Nancy gets Ronnie to blame Iran-Contra on Jeane! Which is really Not Nice! Meantime, Jeane detests Nora Astorga! Who the hell is Nora Astorga? She's Nicaragua's Ambassador to the UN, that's who! And Jeane is America's Ambassador to the UN! They fight like cats and dogs in the ladies' room! They find they're very much alike! Friendship blossoms!! But, Nancy Reagan spins astrological flimflam! Jeane is brought down! But not for long!

"I don’t even agree with myself, sometimes."
~~ Jeane Kirkpatrick ~~

See it if want to see the potential in this comedy/drama about Reagan, Nancy & Jeane Kirkpatrick

See it if you like American politics and want a good historical refresher about Jean Kirkpatrick and her rival at the UN, Nora Astorga, from Nicaragua

Don't see it if important, recent American historical events bore you, or you do not want to learn something new in an intelligent way.

Don't see it if Can accept an actor who neither looks nor sounds like Reagan, expect some production values

See it if Using the hilarious dialogue, Talbot’s Streep-like transformation into formidable Jeane Kirkpatrick is a delightful revelation

Don't see it if You don't like dry performances

See it if you are curious about little known aspects of women in politics in the Reagan era.

Don't see it if you don't have the patience for plays in development.

See it if You would rather learn about the Iran-Contra affair through bad acting than Wikipedia, You like big names more than good theatre

Don't see it if You prefer plays that are rehearsed, technically competent, not insulting to women, or with good writing. This fails on all those counts.

70
Confusing, Disappointing, Intelligent, The lead actor is victorious in the destruction of the playwright & sadly her fellow actors

See it if You wish to see how an unrehearsed, miscast production resulted in the 'assassination ' of this political satire.

Don't see it if You are a budding playwright, and choose not to witness how one poor performance ricochets and sends your dialogue circling the drain, tsk

“This underrehearsed piece is marred by sluggish pacing and lengthy expository scenes with secondary characters. Worse, the comedy it does mine is unfortunately vulgar...The scenes between Kirkpatrick and Astorga have a great deal of potential. These two very different women spar over politics, celebrity culture and Chanel in ways that are smart and exciting. Perhaps Nevaer could refashion this as a two-hander, and flush the rest.”
Read more

"The staging is static, and actors spend most of their time sitting down or facing front...Actors flub lines and visibly skip around the script...Characters often describe their personal changes rather than actually undergoing them onstage. Consequently, there is little emotional arc for any character...There are, however, a few successful moments...While comedic elements are inconsistent and frequently lost behind exposition, the moments that shine through are sharp and witty."
Read more

"While political drama can be hard-hitting, 'Reagan’s Athena' is more like an acute career study...Some of the most dialectically challenging (and politically energized) text in the script might not be the most dramatic...The actors look like they are still fine-tuning points in the drama. Searching for meaning in the dense, layered story, the overall execution of the play feels a bit dragged down...It would be inspiring if the play was lifted up, out of the workshop phase."
Read more