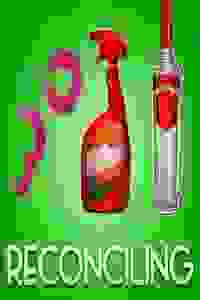 Part of FringeNYC: What do a Baptist, a bro in handcuffs, and a botched funeral have in common? Find out in this rapid-fire dark comedy where one word has multiple meanings. Broadway Baby called it "ingeniously constructed and eloquently performed...4 Stars."

FROM THE ARTIST:
Reconciling explores what happens when an ex shows up at your door step, your best friend betrays you, and the family inheritance in up for grabs. Plus, there's vodka...that always makes things interesting. These three stories play out on top of each other, constantly connecting and crashing into each other in surprising and enthralling ways.

Critics from its world premiere at last year's Edinburgh Fringe Festival called it "tremendous fun" (Three Weeks) "a dynamic work from an impressive new company" (Ed Fest Mag) as well as "ingeniously constructed and eloquently performed; worth seeing for its structure alone but also for the tales it tells" (Broadway Baby).

See it if Clever premise, well executed but ultimately disappointing

“Hinson’s staging is subtle and seamless, allowing the audience constant opportunities for discovery in small moments...Mixing comedic and dramatic elements, the writing brings heart and sincerity to the characters, and breaks the tension at just the right times. ‘Reconciling’s’ beauty is the kind which can only happen in live theatre, and it is a joy to see a young, ambitious group of theatre practitioners harness their craft so well.”
Read more

"In 'Reconciliation,' things go better when each 'play' is running as a separate piece. When the stories impede upon one another, clarity is lost, dialogue is difficult to sort out, and the actors often seem left in awkward positions on the set. It might have been better for playwright Jenny King to cast someone else as actor Molly. It is difficult to write a complex piece like 'Reconciliation' and be in the cast...Hinson’s inconsistent and extempore direction needs tightening throughout."
Read more

"What hurts King's play is the complete lack of clarity. Whether it was on her part or on the part of director Julia Hinson, 'Reconciling' tried so hard to be something it could never be…With pauses deflating the acting, the company did what the script prescribed…'Reconciling 'is an example of complexity in intricacy. It's also an example of trying to be something grander than it could be. Perhaps Jenny King should go back to the drawing board."
Read more

"These independent stories are told simultaneously…This may sound rather complicated in theory, but in its execution it becomes beguilingly simple and as wondrous as turning a kaleidoscope. Through their studies together the cast has worked collaboratively for some time and this clearly impacts the ease with which they interrelate in this production...'Reconciling' is ingeniously constructed and eloquently performed; worth seeing for its structure alone but also for the tales it tells."
Read more

"A rapid-fire barrage of dialogue that demands the audience’s full attention; luckily, the quality of characterisation, pathos and humour all make that a given. The six talented actors time their exchanges and interchanges expertly, and with gusto, ensuring that the comedic and dramatic beats all land perfectly. They shift tone smoothly and powerfully, giving the script an air of verisimilitude...It’s tremendous fun: three good plays crammed together into less than hour."
Read more

"Three stories are expertly intertwined…Things get interesting when the characters begin to break through the boundaries of their own stories...It’s a sophisticated mechanism that elevates the material into something really creative and exciting. There are moments when it can be hard to follow the quick changes in focus...The main thrust of each story is communicated extremely well, however, and the emotional resonance of the characters is strong...A dynamic work."
Read more