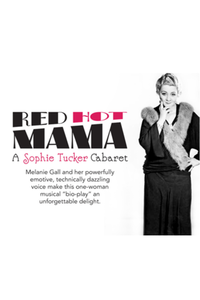 Gall takes the stage as Tucker, who recaps her rise through early 20th century vaudeville, cabaret, and Hollywood. The cabaret format allows Gall to fully inhabit the star, relating the indignities of being forced to perform in blackface and getting fired for being plus-size, telling jokes that would make Joan Rivers blush, and singing ‘20s standards and her signature bawdy love songs.

See it if You enjoy one woman cabaret acts, with a phenomenal singer.

Don't see it if The performer's raunchy jokes fell super flat, she didn't have the umph to back them up so the moments between the songs were rough.

Don't see it if You don't like 1-person shows. Ms. Gall's tame demeanor was wrong for the material; her delivery of raunchy material was uncomfortable.

See it if you like one woman cabaret type shows...

Don't see it if you love hearing a great Soph & Ernie joke... The performer was quite charming and sweet, but she was missing that "oomph" that Sophie had..

Don't see it if You want a more Authentic Sophie!

See it if you have no knowledge of Sophie Tucker. Miss Gall is charming with a pleasant voice, but out of her element as a red hot mama. A misfire.

Don't see it if you remember Sophie. The songs are the same but sung by an opera-trained soprano. An angel-faced ingenue can't pull off those jokes.

See it if you liked Sophie Tucker. Entertaining. Some singing was very good.. some off key. Not enough story about Sophie. 1 or 2 sentences into song

Don't see it if don't like one woman show and also the show was just under an hour which was disappointing. Read more

See it if You get a comp ticket

Don't see it if You have to pay

"Gall, in eye-catching headdress and plunging neckline, mixes songs with risque jokes that likely would have appealed to a woman known for her bawdy, self-deprecating sense of humor…There is, as there always is in biographical shows, a touch of sadness behind the success. The woman nicknamed 'The Last of the Red Hot Mamas' couldn’t find love. But with Gall’s exuberant characterization of Tucker, nobody stays down for long."
Read more

"Tucker sang with a powerful, earthy contralto and loaded her bawdy performances with innuendo. As in her Piaf show, Gall does not sing like the performer but her voice is as commanding as anything Tucker delivered…DeWaal is a dramatic storyteller and his sure hand is obvious throughout as he peppers Gall's monologue with telling anecdotes…Gall, arms provocatively on her hips, gives her considerable all to this fascinating story of a show business original."
Read more

"Melanie Gall and her powerfully emotive, technically dazzling voice make this one-woman musical ‘bio-play’ an unforgettable delight…Writer-director Erik de Waal keeps the staging minimal and opts for pre-recorded accompaniment. These may be economical choices, or choices recognizing that once Gall starts singing, nothing else matters. We don’t get the end of Tucker’s life story, but that doesn’t matter either. She is still gloriously, vibrantly alive in Gall’s performance."
Read more