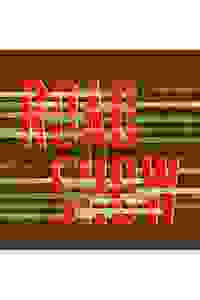 Encores! Off-Center presents a new staging of Stephen Sondheim and John Weidman’s larger-than-life musical about of two brothers, who are fueled by a modest inheritance to stake their claim on a piece of the world.

At what point does the pursuit of the American Dream become an empty enterprise? Stephen Sondheim and John Weidman’s Road Show is a larger-than-life account of two brothers—schemer Wilson Mizner (Raúl Esparza) and his more thoughtful sibling Addison (Brandon Uranowitz)—who are fueled by a modest inheritance to stake their claim on a piece of the world.

Their adventure drives them into the throes of the Alaskan gold rush and eventually to balmier weather as they attempt to capitalize on the Florida real estate boom of the early 1900s, with Addison eventually separating from his unscrupulous brother and finding love in partner-muse Hollis Bessemer (Jin Ha).

Yet, though their literal and psychological quest for gold is ultimately ill-fated, after all else is lost the brothers find their bond cannot be broken even in death. Loosely based on a true story, Road Show examines and questions the definition of success.

Road Show is part of the 2019 Encores! Off-Center season along with Promenade and Working: A Musical. These three seldom-performed gems each explore and re-examine the concept of the American Dream. Read more

See it if you're a Sdhm fan. RS may not be his best show. but clever staging/talented actors delight. Explores grifter harming society.Sibling rivalry

Don't see it if you're not a Sdhm fan (who are you?). Book has holes, but still engrosses. Songs soar w/Esparza, Uranowitz! Conceit of radio show works well

Don't see it if Even for Sondheim, it's a dark, dark piece w/ both Mizner bros coming off badly Yet, speaks volumes for current American financial endeavors

“Raúl Esparza and Brandon Uranowitz Liven Up Sondheim's ‘Road Show.’ Will Davis directs the show for Encores! in the best production of this musical you'll probably ever see.“
Read more

★★★★ "Raúl Esparza, Brandon Uranowitz, and others shine in a concert production of the Stephen Sondheim/John Weidman musical."
Read more

"Given that the main characters don't evolve much, 'Road Show' requires tour guides of the highest order. Raul Esparza, in a triumphant return to musicals (and Sondheim musicals, in particular) delivers an almost-vaudevillian turn as Wilson."
Read more

“Does ‘Road Show’ now deserve a place in the canon of American musical theater? I'll take a cue from the Supreme Court and render a narrow judgment avoiding…comparisons to Sondheim musicals with more clear and resonant narratives and memorable tunes…a delightful production in every way.”
Read more