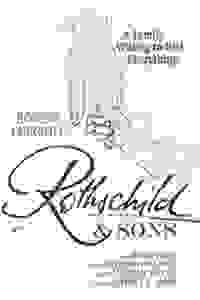 A one-act, intimate re-imagining of the musical 'The Rothschilds' that focuses on the relationships between the patriarch of the family, Mayer Rothschild, his wife Gutele, and their five sons.

A "musical love story between a father and his sons," 'Rothschild & Sons' is based on the Tony-nominated 'The Rothschilds,' which opened on Broadway in 1970, inspired by the novel of the same name by Frederic Morton abut the foundation of the dynasty of German-Jewish financiers. A story of a family fighting for human rights and triumphing over extraordinary odds. The new work focuses on the Rothschilds' experiences living as Jews in a German ghetto.

See it if Wonderful story and muaic

Don't see it if The above

See it if you'd like to learn more about Jewish history beyond WWII and Fiddler on the Roof.

Don't see it if you only like sexy shows.

"You cannot fault the York Theater Company’s rich new production, a one-act reimagining that looks absolutely royal in the intimate Theater at St. Peter’s: Splendid 18th-century men’s costumes, low-key yet opulent scenic design, assertively nuanced lighting...Jeffrey B. Moss’s direction does find the humor wherever it lurks...Most of the songs are only pretty. Maybe it’s too much to expect another 'Sunrise, Sunset' or 'If I Were a Rich Man,' but what’s a musical for?"
Read more

"With a restructured book, several previously unheard Bock and Harnick trunk songs, and only 11 cast members, this almost-new musical is a puzzlement to say the least...Mayer's journey is a moving one, and in Cuccioli's expert hands, it's laden with real emotion. His performance is one of the few highlights of this otherwise misguided production, with a staging that baffles at every turn."
Read more

"Once the complications of the plot take over there's little room left for family emotions. Crampton is an accomplished singer/actor whose role becomes regulated to reminding the men to appreciate modest achievements and while there is genuine excitement when Mayer and his boys roar with gusto as they sing of their ambition and confidence, 'Rothschild & Sons' is that rare Bock and Harnick musical that never seems to find its heart."
Read more

"I can understand how Harnick and Yellen (Bock is no longer with us) would want to find a viable version of 'The Rothschilds' for future productions. But I would respectfully submit that, if, after seven years, this is the result, then it may be time to move on. The best way of enjoying this material still involves listening to the original cast album, where the score's many beauties are presented in all their glory."
Read more

"The show is a powerful study of anti-Semitism in Europe at the end of the 18th century and the beginning of the 19th century and the desire of the Rothschild family to break down both the walls of poverty and those of prejudice. While the new adaptation performed in one act is both engrossing and admirable, it may not be the definitive final version as it is devoid of humor, a necessary ingredient to make a musical popular."
Read more

"Jeffrey B. Moss guides the production trying to infuse as much life as he can....The production is filled with historical value, pathos, heart and some new musical numbers. However, it’s still an old tale that has lost its power and feels worn-out."
Read more

"'Rothschild & Sons' does indeed offer a refreshing new look at this show's best features: its many sparkling period flavored songs with their narrative pushing lyrics, and the smart compression of that narrative…The shift in emphasis as well as the scaled-down staging work well with a tightly focused intermissionless format….Robert Cuccioli brings his operatic voice and plenty of emotional heat to the role of the pater familias."
Read more

"Even a smoothly professional production can’t hide the doldrums that eventually set in with a disappointingly bland score that reveals little of the emotional or humorous impact of 'Fiddler,' and whose sole familiar number, the power ballad 'In My Own Lifetime,' needs new batteries. With a script that eliminates romance and, except in bits and drabs, comedy, this is a show that even Mayer Rothschild might have considered flat, stale, and, worst of all, unprofitable."
Read more