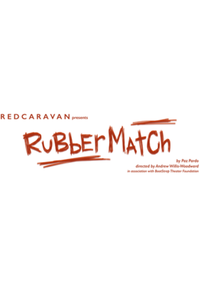 Red Caravan presents Paz Pardo's new play about recovering from loss and the perils of healing.

Ten years after tragedy drove a group of college friends apart, two of them are unexpectedly reunited. Ceci, fleeing a broken relationship, tries to find a new home by moving in with Nina. But when their attempts to reconnect uncover old wounds, Nina's repression is pitted against Ceci's self-destructive tendencies. 'RubberMatch' asks: When can a friend's help become an act of violence?

See it if you want a dynamic two-person show that wrestles with how to deal with life after university.

Don't see it if a two-hander reflecting on how to navigate adulthood and reconcile the past does not interest you.

See it if It's free

“There is much to like here. Andrew Willis-Woodward has directed this two-woman piece with spare style...But, as always, the play’s the thing. Paz Pardo’s story promises more than it delivers...Kayla Jackmon’s charismatic performance as Ceci does much to enliven things. But Ceci is the better-written role while Ms. Owens struggles valiantly to breath life into Nina, who is a one-note character. That said, this is still a worthy production."
Read more