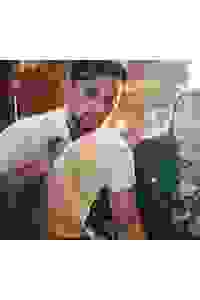 Part of FringeNYC: Set during a late night bus ride on a warm, misty Alabama night, "Sinners on a Southbound Bus" is a dramatic/comedic meditation on fear, morality, and the ghosts we leave behind.

FROM THE ARTIST:
Set during a late night bus ride on a warm, misty Alabama night, "Sinners on a Southbound Bus" is a dramatic/comedic meditation on fear, morality, and the ghosts we leave behind. When Trudy, a quick-thinking young woman, finds herself in the presence of the rash, charismatic Morgan and his more stoic associate, Silas, she sees an opportunity to alleviate some of her boredom on the long, hot bus ride to Dothan. The pleasant conversation, however, takes an ominous turn after an encounter with the police reveals that the two men share a dark, potentially violent secret, which could place every passenger in danger. Trudy, nevertheless, still sees the good in Morgan and, through their budding friendship, finds a connection that forces him to face demons that make every mile more dangerous and every confrontation more volatile, as they head towards their inevitable destination.

See it if an excellent production all around. Well written and acted, good staging, engaging plot, keeps suspense at just the right moments.

Don't see it if The very last scene is somewhat disappointing and rather unnecessary, imho.

See it if You sometimes ask yourself what good and evil mean...and if you want to see a play with real character development.

Don't see it if You are a church lady. Nope, I take that back; see it and open up your mind.

See it if you want see master directing by Phoebe Padget. The cast perform this tight script with clarity. The jokes land and the drama sweats.

Don't see it if You are expecting a full-length bang for your buck. This puppy runs a cool hour.

See it if you enjoy a tense ensemble drama in a southern setting. Good writing and direction.

Don't see it if you are not interested in southern gothic-style settings and characters. Lead actor a bit hard to understand at times. Needs to enunciate.

See it if Like Kevin Kline, great acting, slapstick comedy.

See it if You love good, short plays

See it if You want to experience a great company of actors who bring a unique script to life.

Don't see it if Intensity, harsh language, and some violence offends you. In that case, you should leave America.

“What Ben Holbrook has accomplished in his writing: a consistent sense of danger and intrigue while revealing his character’s sins through a distinct Southern poeticism. The bus transforms into an emotional and spiritual pressure cooker...As strong as it is, 'Sinners' does not come without the rough edges of a play in development...These factors, though relatively minor, lead the production slightly awry from the excellent pacing, energy, and tone that will take this show to its next level.”
Read more

"This is an intriguing story, told in a way that raises many questions...The cast is fine, defining characters and playing into the ambiguity of the situation. One problem is the Southern accents, they are inconsistent and difficult to understand...The script can be revised, shortened to quicken the pace, or lengthened to flesh out the characters. There is plenty of opportunity to increase the dramatic arc. As it stands now, it is certainly worthy of a look and a good conversation builder."
Read more

"A sensational script. 'Sinners on a Southbound Bus' is an example of perfectly dangerous theater…Holbrook's text is biting…He smartly avoids preaching by providing all angles of the conversation with ease…Padget had to tell the story through staging...Unfortunately it wasn't enough. She made it seem as if these people were stationary…Ben Holbrook has written a masterpiece. But this production proves that it’s a difficult play to stage."
Read more