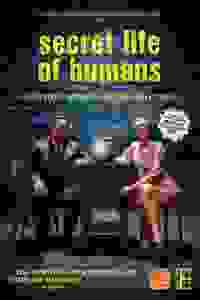 In 1949, Dr. Jacob Bronowski installs a secret, alarmed room in his house. Fifty years later his grandson discovers his secrets, unearthing echoes from across six million years of human history, told from the perspective of a century in which every year is a revolutionary year.

See it if you're interested in WWII England and ethics then/now. Many pronouncements, tho, are obvious or misleading. Video used; people walk on wall.

Don't see it if you want important insights or strong pacing (it drags). Still, SLOH is polished & thought-provoking. A good effort that doesn't quite work.

See it if If you are looking for a show with a very strong, deep plot that is both thought provoking and resonant. Very good acting . 80 minutes that

Don't see it if Goes by quickly. If your not into deep plays that make you think.

See it if A contemplative show with solid performances. It’s very serious and makes you think a lot. Being in the mood for that is important.

Don't see it if You prefer comedies or don’t like shows that contemplate the nature of existence.

See it if you like an intelligent show that makes you think about who you are and where you came from. There are wonderful character studies.

Don't see it if you like comedy or light hearted plays. This play is very thought provoking.

See it if Three stories told including grandson's discovery his hero is linked to Manhattan Project. TED Talks frames the structure of connectedness.

Don't see it if Supposition that the audience is connecting to the ride is far reaching. Throwing in aerialists still doesn't make this confusion palatable.

See it if you like semi biographical stories and deadly developments circa WWII; good acting, staging and directing; evolution of man.

Don't see it if you want an easy to follow timeline; don't like talky theater with little action; you want answers and a happy ending.

See it if you enjoy plays that lack character development and does not have a dramatic arc.

Don't see it if you do not like plays in which the characters are merely mouthpieces for ideas. This is not a play so much as it is a lecture.

See it if you like metaphysical, talky plays.Staging is interesting. Play is not.Some subplots had promise, but got lost in the lectures.

Don't see it if you want a play that has something to say and says it clearly.

"This multilayered drama is asking exactly the questions that need to be asked at this perilous moment in history...Not that this 80-minute production is outright pessimistic. Nor, while you’re watching it, is this hybrid of college lecture and dramatic demonstration all that irresistibly compelling. But it plants seeds of thought that keep growing in your imagination...The cast is more than solid, and the characters they play are drawn with nonjudgmental ambivalence."
Read more

"After a while, one wonders whether this ambitious show might have been better off without such concessions to conventional storytelling...'Secret Life of Humans' is at its most stimulating when it ignores the thinly characterized relationship and fairly unsurprising mystery at its center and becomes a free-ranging meditation on what defines us as human beings...'Secret Life of Humans' offers enough to leave us pondering anew some of the largest eternally burning questions of our time."
Read more

“There's no other show quite like this. It has an intriguing plot, a talented cast, and clever staging that makes the production totally unique...This is a mysterious and gripping story that sheds light on how people's attributes and failings are connected to the history of man...The cast of five is in complete command of their roles...A rare theatrical experience that shouldn't be missed.”
Read more

"It's easy to be entranced by Byrne's acute dialogue, as well as the fluid and visually exciting staging by him and Stanley; it isn't until the show is over that you might find yourself troubled by certain nagging questions...Given the script's constant shifts of focus and unwillingness to flesh out certain situations, the entire cast does remarkably well...Even if you're put off by this shaky dramaturgy, Bronowski remains a fascinating subject, and many of the play's passages are deeply engrossing."
Read more

“The play comfortably jumps through time...The acting is first-rate all around, under the joint direction of the playwright and Stanley, and the staging is enhanced by a marvelous blend of mobile set design, projections, and some unexpected visual and physical twists that keep mind, eyes, and ears fully engaged. Whether you share Jacob's optimistic view of human potential or Ava's wary and jaundiced one, you will find a lot to mull over."
Read more

"Brilliant David Byrne play...Yes, to some extent the 80-minute play that seems to go by in no time flat is a debate. It’s presented, however, with abundant dramatic wit that not only disguises the conflicting argument at its center but enhances it with additional human concerns...Chief among the drama’s sly aspects is the Ava-Jamie relationship...Expertly acted and directed by all."
Read more

"Impressively constructed, eloquent and thought-provoking in its own right. Sadly, those qualities do not, in themselves, guarantee compelling drama...Despite its brevity, 'Secret Life' can seem ponderous; it’s as if in trying to give due weight to the big ideas he’s tackling, rooted in a non-fiction book, Byrne makes the characters he creates (or adapts from history) mere mouthpieces for points of view than fully fleshed out human beings."
Read more

"However, while the play whose time scheme is very convoluted is easy to follow, Byrne along with the company of New Diorama Theatre seem to have played fast and loose with the facts, leaving us to wonder what else has been manufactured. The two philosophies that the play discusses (that mankind is working toward progress and that mankind is destroying itself) are a worthy theme but the plot and storyline appear to be nothing but a fiction."
Read more