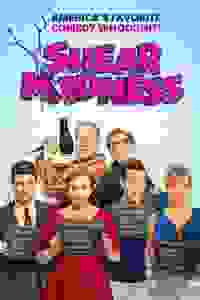 The New York premiere of America’s longest running comedy is a whodunit set in a Hell's Kitchen hair salon, filled with up-to-the-minute humor and nail-biting suspense.

The set-up always remains the same, yet the script is rewritten to ensure the freshest, most relevant, even spontaneous humor—and a different ending every time. The audience plays along, too, questioning the suspects like a bona fide 'Sherlock Holmes,' as they try to solve the murder mystery down at the 'Shear Madness' salon.

See it if you want to have great fun and like audience participation. You'll leave feeling lighter.

Don't see it if you don't like any break in the forth wall and/or are ONLY interested in intellectual humor.

See it if you like a really funny whodunnit (like the movie Clue) and enjoy audience participation. It's a fun night out! Go with a group!

Don't see it if You take yourself or things too seriously, this is a fun show with sharp one liners performed by a talented cast.

See it if you like a lite, funny story, with good acting and a proven strong show. It is a fun show to go see and enjoy.

Don't see it if you don t like audience participation type shows.

See it if So funny! A must see for any theater fan. A hilarious night out!! Great and talented cast

Don't see it if Who done its are not your thing.

See it if you like a completely silly show.

Don't see it if you like humor but with some shred of wit and some originality.

See it if you want the bridge-and-tunnel experience. (This show is best left to community theater.) Or your TV broke & you're desperate for a sitcom.

Don't see it if you don't like audience participation; you expect an answer to the question, "Why is this one of the longest-running plays in the world?"

See it if you like sitcom-y jokes and pop culture references shoehorned into places they don't belong.

Don't see it if you have anything else to do for 2 hours.

70
Clever, Entertaining, Funny, Yes, it's murder mystery, Yes, it's audience participation, get on board

See it if you want to laugh in spite of yourself at low denominator humor & absurd situations, & want the opportunity to determine the ending yourself

Don't see it if you think murder mystery is below your pay scale, you dislike audience participation & think you;ve seen this all before

"Where 'Shear Madness' has the advantage is in its inclusive spirit of fun…This is genuinely all-ages entertainment, not a 'family-friendly' show that will leave grown-ups stultified...The tone depends hugely on the performers, and here this production does very well, particularly with Mr. Noonan, who, as the lead investigator, is impressively skilled at crowd control, and Mr. Ahnquist, whose Tony is an unapologetic sprite."
Read more

"Director Bruce Jordan has gathered an excellent cadre of character actors for 'Shear Madness’s' belated New York premiere…Well acted if not exactly captivating, 'Shear Madness' is as insubstantial as Trump’s coiffure. It’s entertainment whipped up for those who find murder, at least in fictional form, potentially uproarious."
Read more

"The script features a barrage of lame one-liners and predictable gags...The overall atmosphere is so giddily loony that it becomes infectious, and the talented ensemble work so hard at getting laughs that their efforts are justly rewarded."
Read more

"Extended out-of-town tryouts are the stuff of legend — but 36 years? 'Shear Madness,' with franchises all over the country, was originally intended to open in New York after a 1980 Boston tryout. But Beantown audiences were so receptive that the show just kept running...The comedy still isn’t sharp enough for Gotham, but the show’s improvisational nature demands constant topical updates — and New Yorkers won’t be shy about telling the company where to go."
Read more

"Using a thoroughly realistic set and equally authentic costumes, Jordan's staging is absurdly enjoyable, even in its weaker moments. True, the cast members have been directed to be too loud, and the dialogue is more ungainly than graceful. But all such quibbles disappear when everyone in the room has one focused goal: to figure out who killed Isabel. 'Shear Madness' is like a funny version of Law & Order — and it's the perfect show for those among us who think we can spot the murderer."
Read more

"A show that will appeal to bachelorette parties, groups spending a night on the town, and others looking for a few laughs -- but who are not necessarily interested in the theatre per se -- 'Shear Madness' is essentially beyond criticism. The audience at the performance I attended had a fine time. I was aghast, then mildly amused -- and I voted with the majority for the killer."
Read more

"There's nothing of note to care about in the script...The audience's questions and eagle eyes push the cast and the story in new directions, and reveal a bewilderingly in-depth amount of detail beneath the craziness. That's what makes 'Shear Madness' so special despite its pedestrian underpinnings: You're seeing the purest expression of theatre, with the performers and audience in such symbiotic communion that they must create something bigger together than would otherwise be possible."
Read more

"The energizing conceit of the play is its reliance on audience participation that adds considerably to the entertainment…The quick-witted Mr. Noonan really has to steer the show and he winningly does this with his great comedic timing, terrific improvisational skills, everyman persona, and by blowing a police whistle to establish order…New Yorkers can now finally experience the mirthfully compelling antics of 'Shear Madness.'"
Read more