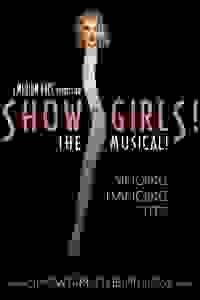 Showgirls! The Musical! is the unauthorized musical parody of the cult classic film Showgirls from the twisted minds that gave you “Bayside! The Saved by the Bell Musical!"

This wild and raunchy musical parody tells the story of Nomi, a "street-smart" drifter who ventures to Las Vegas and climbs the seedy hierarchy from stripper to showgirl.

See it if You love Showgirls the movie and like a very silly show with pretty decent songs.

Don't see it if You are prudish about nudity. If you don't like purposefully bad acting.

See it if You enjoy singing and dancing.....sexy women

Don't see it if You are uppity.

"It’s uncertain whether Mr. Verhoeven was conscious of his film’s more cartoonish dimensions, but there was no mistaking his chauvinism. Now comes “Showgirls! The Musical!,” with a book, music, lyrics and breathless direction by Bob and Tobly McSmith. Here the chauvinism (and abundant toplessness) is played for laughs, kind of."
Read more

"To borrow a phrase from Berkley’s Nomi Malone — the stripper/dreamer with a mysterious past, flaccid nipples, and equally nice nails and tits — "it doesn’t suck"...It’s impossible to call this production anything other than a guilty pleasure. Then again, if you’re a fan of Showgirls, that’s precisely what you’re after."
Read more

"A lyrically clever score; the music is not particularly memorable, but nevertheless it captures the essence of the film. So does the craptastic design, which would be a major point of contention in almost any other show, but seems appropriate here."
Read more

"Generally, Bob and Tobly McSmith’s script is decent enough. That said, any shortcomings in the script are made up for tenfold by key performances. Throw in some catchy and hilarious musical numbers, choreography that is consistent, and perfectly dazzling costumes and Showgirls! shapes up to also be a full-fleshed stage musical, teeming with energy."
Read more

"It never asks its audience to be taken too seriously. Aware that their source material is a veritable gold mine for laughs, the members of the dynamite cast make “Showgirls!” a memorable night of downtown theater, even if the songs they're singing are occasionally beside the point. Whether you’re seeking legitimate farce or just some old-fashioned, gratuitous nudity, “Showgirls!” satisfies."
Read more

"It’s an already amusing, peculiar and raunchy film, but somehow the new off-off-Broadway Showgirls: The Musical! manages to make it an even more hilarious, inventive and twisted experience. Side-splitting groaners enhance the barrage of ribald dialogue, bizarre characters, and low-budget props that keep the audience in stitches."
Read more

"Showgirls the Musical has elevated mocking the movie to a true art form. Most of the show’s humor is derived by referencing lines and moments from the movie’s script. I thought it a risky move as it presumes the audience’s familiarity. But when I asked my companion who had never seen the show what he thought, he couldn’t answer, because he was still wiping away tears of laughter."
Read more

"Is there a ton of value to be found “Showgirls! The Musical” outside of kitschy kicks and the ample nudity? Not really; you’re not likely to leave remembering many of the songs or lyrics (except for perhaps “Boat Show!”), but the aim by MediumFace doesn’t seem to be to create a classic piece of theater but to deliver a shameless good time. Not unlike Verhoeven and Eszterhas, they did."
Read more

"If you’re anything like me, you see a title like Showgirls! The Musical! and buy a ticket without even finding out how much it costs first. While MediumFace Productions doesn’t always deliver fully on the promise of their good idea, they nonetheless offer a solid night of sometimes surprising, sometimes sexy, and frequently hilarious fun."
Read more

"So, if you’re a fan of the original “Showgirls” or just want to check out live naked breasts under the guise of art “Showgirls! The Musical!” fits the bill and then some.  See it before rising rents or the mayor’s no-fun squad, catches up with one of the last topless and delightfully tasteless good times in town."
Read more