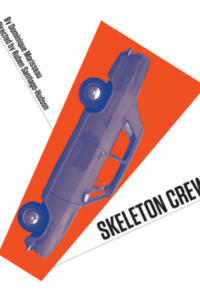 After a successful run earlier this year, Atlantic Theater Company brings back Dominique Morisseau’s hit play about four Detroit auto workers during the 2008 recession for an encore run.

'Skeleton Crew' is a timely and intimate look at the lives of four Detroit auto workers as they struggle through an uncertain future. In this final installment of Morisseau’s Detroit trilogy, a makeshift family of workers at the last exporting auto plant in the city navigate the possibility of foreclosure. Power dynamics shift, and the workers are pushed to the limits of survival. When the line between blue collar and white collar gets blurred, how far over the divider are they willing to step? Following its critically acclaimed run at Atlantic Stage 2, the show returns with its original cast for a six-week engagement at Atlantic’s Linda Gross Theater.

See it if you like workplace dramas. The characters are well-drawn, as are the conflicts. You feel for all as they face the decline of their industry.

Don't see it if you want a perfect script. This could have used some cuts. Still, it was compelling and elucidating...and very well staged/acted. Read more

Don't see it if you are up for lighter fare tonight. Issues treated might hit too close to home.

"The financial perils and uncertainty for workers at the mercy of industry pressures are movingly depicted in the earthy 'Skeleton Crew,' tautly written by Dominique Morisseau and briskly directed by Ruben Santiago-Hudson...By the conclusion, in-depth acquaintance with the characters has been achieved and the playwright, skilled actors and a knowledgeable director have succeeded in shining a spotlight on a vulnerable slice of America."
Read more

"An engrossing, pertinent script, well acted and directed. Despite a rather depressing atmosphere, made heavy by the threat of unemployment, Morrisseau skillfully weaves humor, friendship and forgiveness into the story...The action on stage may depict issues specific to Detroit's auto industry, but the playwright poignantly reminds us that anyone's life can change in the blink of an eye and the reality is that these characters could be any one of us."
Read more

"Warm-blooded, astute and beautifully acted four-character drama...It is, in many ways, an old-fashioned play: naturalistic, tightly structured and filled with self-defining monologues of vernacular lyricism...It is, in other words, a deeply moral and deeply American play, with a loving compassion for those trapped in a system that makes sins, spiritual or societal, and self-betrayal almost inevitable."
Read more

"Morisseau’s play is firmly based in the lives and evocative language of its four characters, whom Ruben Santiago-Hudson’s powerful production treats with August Wilson–ian respect. They’re messed-up but decent people, driven by forces that may or may not be beyond their control."
Read more

"There’s little wrong with 'Skeleton Crew,' that August Wilson couldn’t fix. Like Wilson, this playwright has heart, along with a sense of historical moments that define the lives of ordinary Americans. Her rough-edged dialogue even has a touch of the street poet. What’s missing in the work is a grasp of character-driven dramatic action — although that can still be acquired."
Read more

"'Skeleton Crew,' set in the dingy break room of a Detroit auto-parts factory, looks modest but is deeply affecting...Dominique Morisseau’s drama effectively weaves together all their stories. Flawed as her people are, we root for them — especially since the cast is absolutely terrific. Don’t miss this intimate gem."
Read more

"Morisseau creates characters who don't merely speak, they sing with the vernacular of their community. Rarely has dialogue ever felt so much like eavesdropping on an actual conversation...As for the company, they are collectively impeccable."
Read more

"An engrossing character study of types that add up to a vivid portrait of urban collapse…Morisseau's fluid and naturalistic dialogue and the strong work of director Ruben Santiago-Hudson and his fine ensemble add up to an edgy and engrossing drama that delivers a solid emotional impact."
Read more

"Each of the four characters feels the pressure even as Morisseau skillfully weaves them into a web of friendships, dependencies, and rivalries...It's strong stuff, forcefully delivered in Ruben Santiago-Hudson's crackling production, which features four exceptionally fine performances...It reaches a gripping resolution when one of the characters makes an enormous sacrifice; it may only be then that one realizes how well-constructed 'Skeleton Crew' is."
Read more

"Morisseau calls out to a vital yet ghostly past that informs a challenging, uncertain present. Santiago-Hudson has perfectly crystallized this in his unforgivingly realistic staging...Morisseau finds a poetry in their trials, as well as a message for all those who struggle to establish themselves, from their inner being on out, in places where that's nearly impossible."
Read more

"'Skeleton Crew' is a poignant and effective conclusion to Dominique Morisseau's Detroit trilogy thanks to its smart script and tremendous actors...Big-hearted and quietly moving...Morisseau's drama is a testament to the ordinary lives that shaped the city's mechanical golden age that must now cope with its hastening degradation. The way each of the four characters handle this shift—eeking out their lives through an assembly line's minute tasks—is where Skeleton Crew finds its greatest life."
Read more

"The premise goes from dubious to fabricated, but it allows for needed dramatic tension…Ruben Santiago-Hudson’s direction is smooth and unforced...As for the playwright, she creates a mood of tension that simmers throughout. The members of the ensemble are all strong, playing off and complementing each other with street-tinged grace...Skeleton Crew comes up short on details, but its hard-bitten heart ensures there’s genuine skin on its bones."
Read more

"Ms. Morisseau's storytelling isn't quite up to the poetic grandeur of August Wilson's epic Pittsburgh cycle. However, she has created four vivid, likeable characters and provided them with authentic dialogue and stories. She's blessed to have an excellent ensemble to bring those characters and their inner conflicts and interactions to life and deliver that dialogue with a natural ease."
Read more

"Playwright Dominique Morisseau has a gift for telling her very big stories in her small details…Morisseau manages to make the overworked metaphor of the work family as real family—work…To be sure, Morisseau sings the song of Detroit—this is the third in her hometown trilogy—but, more, she is writing an original American story."
Read more

"It’s far more than the topical relevance of the two-hour work that commands our attention, it’s Morriseau’s remarkable skill in crafting the interpersonal relationships among the four people that populate a factory break room...If Morriseau is going for a 10-play cycle about Detroit, count me in. She’s got my motor running."
Read more

"With Ruben Santiago-Hudson putting pedal to the metal with his sensitive yet powerful direction, Ms. Morisseau’s eight-cylinder play goes from zero to 60 in the blink of an eye, thanks to the high-octane artistry of Lynda Gravatt, Jason Dirden, Nikiya Mathis, and Wendell B. Franklin...When act one ended, I couldn’t help saying to my guest, 'Now that’s professional acting and direction!' It sure is professional writing...Despite its title, there’s plenty of meat on this play's bones."
Read more

"It’s easy to discern echoes of Wilson in 'Skeleton Crew.' Director Ruben Santiago-Hudson adroitly brings out Morisseau’s beautiful rhythms and the comic tones in the bickering among the characters. As in Wilson, the often poetic language is rich but not precious, spoken by down-to-earth characters who embody the comedy and the tragedy of everyday lives. The cast could not be better."
Read more

"The situations are involving and the dialogue is lively. Morisseau’s characters, brought to life by a superb cast, are easy to care about. At its best moments, it recalls August Wilson’s work. The play is greatly assisted by a first-rate production directed by Ruben Santiago-Hudson. Michael Carnahan’s set creates a believable factory break room down to the smallest detail."
Read more

"Morisseau's play is unquestionably a strong, formidable work...Director Ruben Santiago-Hudson has crafted an excellent production that does it full justice, especially with a faultless cast...Without revealing the climax, I didn't care for some late show plot twists. It's hardly a happy ending, but 'Skeleton Crew' seems built for tragedy."
Read more

"Morisseau writes good, natural-sounding dialogue that allows us to get fully engaged in the characters' evolving lives...The production's pace is greatly helped by Ruben Santiago-Hudson's dynamic direction. 'Skeleton Crew' is a very watchable play about ordinary people trying to get by in the world. What you take away from the theater is Gravatt's rich, uncompromising portrayal of one woman's determined spirit of independence."
Read more

"Morrisseau’s dialogue and weaving of plot reveals, against the backdrop of imminent adversity, is breathtaking and heart wrenching...This is a masterpiece of salient and stirring dialogue...The instantaneous audience ovation expressed the overwhelming appreciation of a piece that combines astounding writing, visionary direction and truthful performances in an extremely necessary production. Warning: It has the power to awaken activist blood in you."
Read more

"What might be the most compelling and culturally relevant play of the season...This ensemble was as tight, on-point, and incredibly credible...This riveting piece is most assuredly best performed in an intimate black box theater where emotions are high and contained."
Read more

"The play slowly and consistently goes to work on theatergoers' minds and hearts, and in the end, proves to be work that is both deeply moving and thought-provoking. Throughout, the cast delivers Morisseau's drama—and comedy—with aplomb."
Read more

"GO SEE THIS PLAY. It isn't often that I get to see a play about blue-collar workers, about people I know and grew up with, so I'll always stand up for one. Also, this play has such beautifully detailed writing and characterizations and acting. It's truly so well done."
Read more

"The 'whodunit' dramatic tension keeps the play exciting—Morisseau keeps giving us reasons to love the people we most suspect...Although we first see these characters as snapshots, they grow into complex people we deeply invest in, and concordantly Morisseau invests us in the plight of the American autoworker."
Read more