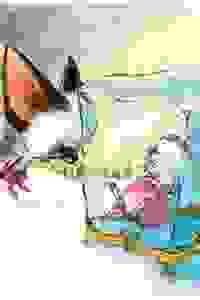 Skippyjon Jones Snow What (& the 7 Chihuahuas) NYC Reviews and Tickets

A brand new free children's musical by Theatreworks USA, 'Skippyjon Jones Snow What' is a twist on the classic fairytale "Snow White and the Seven Dwarfs."

Mirror, mirror on the wall, who is the bravest Chihuahua of them all? Skippyjon Jones the Siamese cat who thinks he's a Mexican Chihuahua of course! While his sisters listen to Snow White and the Seven Dwarves, Skippy heads off for the REAL adventure awaiting him in his closet. There, as his alter ego Skippito Friskito, and with the help of his friends the Seven Chimichangos, Skippyjon must rescue the beautiful princess Nieve Qué (Snow What), battle the evil dragon and defeat the Bruja.

Don't see it if You loved the Skippy Jon Jones books.

"This effort is clever, comical and boisterous...Parents can be forgiven for wondering if this isn’t too big a dose of gender, not to mention ethnic, stereotypes. But the wryly satirical 'Snow What' never offends. And the story doesn’t stick with tired traditions. Nieve Qué takes up sword-fighting and feminist attitudes."
Read more

"As a mother of two kids, I’ve seen my share of “family friendly” productions. And if I’m being honest, sometimes I’m cringing. Other times, I find myself having a ball right next to my kids. Skippyjon Jones falls in that latter category...Interestingly enough, many of my companions, a group of 8-9 year olds agreed with me about the show’s highlights...the play rated a solid 3.5 out of 4 stars from the campers. Depending on who’s going, that assessment might be a great deal more important than my B."
Read more

"Let’s face it: Any review is irrelevant to the target audience for 'Skippyjon Jones Snow What,' which is unlikely to read one. But then, that audience is unlikely to read anything, period. This new musical is aimed at children who don’t need critics to tell them that they’ll enjoy it. So will the grown-ups who go along: This rollicking show isn’t cloying in the least...I laughed like I was in pre-K, too."
Read more

"The doggone delightful kids musical 'Skippyjon Jones Snow What (& the 7 Chihuahuas)' comes with an easygoing lesson: Imagination can lead you anywhere you want to go...Del Aguila’s terrific cast of actors, many of whom play more than one role, and fleet staging for Theatreworks USA remind that you don’t need a big budget to make a big impact. A magic mirror trick and a fluffy woodland chorus make for dandy visuals. The show doesn’t just teach about imagination. It follows its own lesson."
Read more

"Officially aimed at children ages 3 to 9, 'Skippyjon Jones Snow What' is a great first-time theater experience for young children. It's only an hour and, though it doesn't have any audience interaction, it's extremely engaging with peppy, Mariachi-infused songs."
Read more