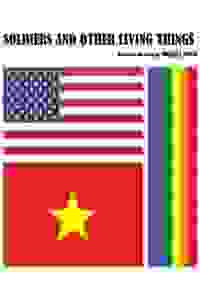 Set in the pre-“Don’t Ask, Don’t Tell” era of the Vietnam war, two wounded soldiers return home to face issues of patriotism, survival, and the unspoken love they have for each other.

Facing conflicts on the battlefield as well as at home, it's the story of two soldiers struggling to find self-acceptance in a world just beginning to tolerate same-sex orientation. One injured during the evacuation of Saigon, and the other suffering from post-traumatic stress, they eventually find themselves in a veteran's hospital where, through a series of encounters, they find the courage to confront the intensity of their feelings.

See it if Too many scene changes and the focus of the story is rather unclear makes this play confusing & too long. The only standout is Zack Rickert.

Don't see it if There are men kissing, a wheelchair, a Melissa McCarthy impersonation and a brother who writes poetry but not gay. The word is ambitious.

See it if shows like Vietnam War "Sticks and Bones" and "Streamers" with their gay, disabled, family, & race themes (of the 70's era) are for you.

Don't see it if you expect something with brand new perspectives, or don't like to be reminded of Vietnam.

See it if You enjoy period plays that have modern day relevance. If you can find humor in dark places. If you like good family dramas. And the F word.

Don't see it if You’re not comfortable with topics such as homosexuality, drugs (marijuana mostly), sex, vulgar language and death.

Don't see it if you’re expecting to learn anything new about being gay in the army. Read more

See it if You want to see an unconventional love story, honest performances from a strong ensemble cast, and themes that will spark conversation.

Don't see it if You have military related PTSD. There are scenes that could be triggering. Read more

See it if you are interested in a story exploring war, "manhood", and acceptance in a time of intense persecution and polarization.

Don't see it if discussion/portrayal of war, gunfire, suicide, and/or PTSD are triggers. Read more