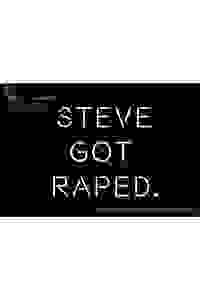 Part of FringeNYC: In this new dark comedy, Steve and Katie, engaged and expecting their first child, think they are on the right track. However, when a shocking event happens during Steve’s bachelor party, the couple's lives start to veer off course.

Don't see it if can't explain why you wanted to see a show named STEVE GOT RAPED, as Little Sally says in URINETOWN, "A title can ruin a show"

See it if a new angle on what "rape" means, presented with a light touch, is for you. I especially liked the second half.

Don't see it if you hate nuance.

See it if An original comic voice with great energy, insight and original characters and situation

Don't see it if You're sensitive about dark humor

See it if You find issues of gender and relationships compelling

See it if You have a bit of a twisted sense of humor.

Don't see it if You don't like sex jokes.

See it if You like thought-provoking theatre that makes you laugh and cry and at life's uncomfortable consequences. It turns the table.

Don't see it if You are unwilling to be challenged about the role of men and woman in sexual politics, or if easily offended.

See it if You want to see a serious topic tackled with humor, good performances, and no easy answers.

Don't see it if You can't handle grey areas or want to guffaw for 90 minutes straight. Not that kind of comedy.

"Frenetically directed by Melissa Firlit, the cast dials everything up past 11; as a character who enters toward the end of the play, Mara Gannon does offer a hint of nuance, but it’s too little, too late. Having set up a chance to explore male rape and masculine fragility, Gooley opts instead for would-be zingers...If you’re going to call your comedy 'Steve Got Raped,' you’d better be prepared to go dark and deep. This is just soiled fluff."
Read more

"Playwright Sam Gooley tackles a difficult subject and makes it easier to talk about…The writing is constantly straddling the line of emotional depth and personal humor—the sort of 'did he just say that?' mentality that makes the conversations between three close friends just offensive enough to be relatable. 'Steve Got Raped' does well what theatre does well: it presents a question that it does not claim to know how to answer, but gives the audience permission to comment, to engage."
Read more

"A strikingly honest and mega-comedic piece of mature theater. Sam Gooley as playwright walks a thin line between satire and disrespect with his dialogue. His honesty in tackling this taboo issue never betrays the audience. Under the three-sheets-to-the-wind, no-holds-barred direction of Melissa Firlit, their combined efforts push the envelope without breaking the seal…If you’re in for a horribly good time that’ll leave you with questions over scotch, this one’s for you."
Read more

"Under Firlit’s well-paced direction, the ensemble cast members play well off one another and bring the issue of male rape to the forefront with a welcomed sensitivity. However, sometimes the script’s insistence on being comedic gets in the way of their ability to explore their characters with necessary depth and intuition...That said, it raises deep and rich enduring questions about rape in general and male rape specifically. Gooley is to be commended for his decision to tackle this topic."
Read more

"An edgy piece that is equal parts funny and provocative. The story captures a discussion on rape from a different perspective, through the eyes of gender...Gooley's dialogue is sharp and quick...The characters he creates are basic archetypes, just with a little more depth. It's a satisfying story. Except for the ending...'Steve Got Raped' exemplified the beauty of a connected ensemble...Not for everyone. If you're willing to be challenged, it's worth a visit."
Read more

"Gooley’s narrative is effective in conveying the uncertainties that the immature, and largely unlikeable, characters feel but have trouble expressing…Despite a lack of chemistry between the two actors, they deliver the emotional turmoil and ambiguities inherent in their individual roles, slowly coming to the realization of their true feelings and showing some development...Though described as a 'dark comedy,' the issues raised are not all that funny, but they are seriously relevant."
Read more