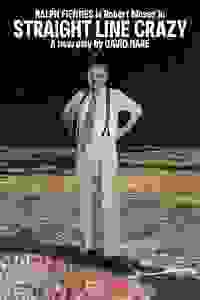 Ralph Fiennes stars in David Hare’s new play documenting the life of an insidious man who exposes the weakness of democracy.

Robert Moses has been the most powerful man in NYC for over 40 years. Though he's never been elected to office himself, he has manipulated those who were. However, groups of grassroots organizers begin to campaign against his schemes, and fight for their vision of what their city should be.

See it if You want to see excellent acting in a very well written play. While it is about New York history the relevance is universal.

Don't see it if You don’t care for politically themed plays, especially ones with local characters and interest.

See it if you're a fan of Ralph Fiennes, you're interested in architecture & urban planning, want to learn about Robert Moses, fan of NYC history

Don't see it if Can be dry at times, two longish acts, were characters based on his real staff, expect more action more coverage of Moses's ups and downs

See it if You’re from NYC, want to learn about Moses, & love Fiennes. It’s a very interesting historical lesson.

Don't see it if You don’t want to see a play that feels like a staged biographic piece you’d hear on NPR. It’s not entirely captivating.

79
The good, the bad and the ugly of robert moses

See it if u are interested in a relevant and controversial personality; Moses did some wonderful work and was a creator but he also caused destruction

See it if Ralph Fiennes in a masterful portrayal of the master builder. Overly dramatic, but he captures the Moses personality.

Don't see it if It was also fun seeing Gov. Al Smith, and his portrayal was also over the top. The acting was fine, but the accents were not quite right. Read more

See it if Ralph Fiennes' the biggest draw! Robert Moses story is pretty straight forward if you're familiar with his classist, racist tyrannical work.

Don't see it if Applies current social justice values (public including people of lower income and people of color) onto his work, imagined scenes of biopic Read more

See it if you're interested in a smart play that's quintessentially New York & at the same time universal, superbly written & led by the great Fiennes

Don't see it if you don't like long wordy plays, that try to take on too much by touching on numerous deep themes that are not all served equally well.

See it if you don't want to miss Ralph Fiennes taking on this very unsympathetic character who cannot change with the times.

Don't see it if wordy plays put you off. You don't like plays that mix real characters with fictional ones.

"If the efficiency of the brute is often superior to the fecklessness of democracy in getting things done, it is not always as lasting — which is reason enough to see 'Straight Line Crazy.'"
Read more

" 'Straight Line Crazy' feels like a further retreat toward the conventional. It’s the kind of thing you might see programmed at any nonprofit around the city — an easy one for subscribers."
Read more

"Even an often-dazzling turn by Mr. Fiennes cannot disguise that the playwright is overmatched by the sheer size of Moses’s monumental, and still controversial, achievements."
Read more

"Fiennes manages to find the shades of emotion in a Moses written as little but bullish. The strongest moment is his final epilogue to the audience about his approach to swimming, the one skillful metaphor for Moses's career that parallels the play's opening lines."
Read more

"The performances are as outrageously luxurious as a full-length fur coat, so much so that it's easy to ignore the wire hanger on which they hang."
Read more

If Straight Line Crazy creaks a little, Hare has put onstage a fascinating chapter of New York history -- and in a moment when so many seem to prefer strongmen as their political leaders, he gives us something to think about. (On another day, we can discuss the irony of presenting a play about the potential disastrous effects of urban planning at Hudson Yards, a characterless development that many consider to be blot on the city's skyline.) And Fiennes' incarnation of Moses, in all his idealism and power lust, is one for the books.
Read more

Every once in a while, the right actor is found for the perfect historical role. Take for instance, Julie Harris as Emily Dickinson, James Earl Jones as Paul Robeson, Hal Holbrook as Mark Twain and Audra McDonald as Billie Holiday. Add to that list Ralph Fiennes’ titanic performance as builder and city planner Robert Moses in David Hare’s latest London import, "Straight Line Crazy," with eight out of 11 original cast members of the London Theatre Company’s 2022 production. Co-directors Nicholas Hytner and Jamie Armitage convert what could have been a civics lesson into a riveting and enriching evening of theater.
Read more