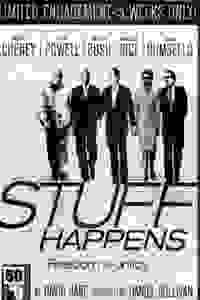 A play about the time in the White House right before the Iraq War, first premiered in London in 2004 before having its U.S. premiere at the Public Theatre in 2006.

David Hare’s 'Stuff Happens' is a play about the events that led up to the 2003 Iraq War, beginning at about the time of George W. Bush's election in America in 2000. Parts of the dialogue are direct quotes from the characters' real-world counterparts. The author has stated that the dialogue is not “knowingly untrue” but he had to sometimes “use his imagination” to cover events that were not recorded verbatim, admitting that his play is not a documentary as such.

Don't see it if You can't deal with anything George W. Bush.

See it if You adore intelligent theater that challenges you!

Don't see it if You dislike the works of David Hare. You are a fan of Donald Rumsfeld et al.