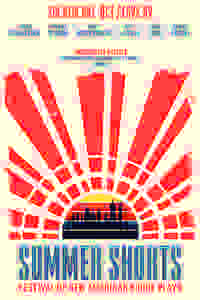 This annual festival of new American short plays returns to 59E59 for its 12th consecutive year.

The festival's two series consist of three plays each.

'Sparring Partner'
By Neil LaBute
Directed by J.J. Kandel
The long time flirtation between two co-workers comes to a head over the course of a lunchtime game of "Hollywood Names." Will their "affair of the mind" blossom into something more or is it about to take an even darker and more dangerous turn?

'IBIS'
By Eric Lane
Directed by Terry Berliner
Ty has been haunted by the disappearance of his father ever since Victor abandoned his family twenty years ago. But when he hires a no-nonsense female detective to solve the mystery and track Victor down, the answers she uncovers add up in ways that even Ty could never have predicted.

'The Plot'
By Claire Zajdel
Directed by James Rees
Frankie and Tyler's mother has purchased a plot at the local cemetery, and today her children have been summoned to approve their mother's final resting place. As they wait for her to arrive, Frankie and Tyler's growing realization of their own mortality triggers an avalanche of emotions.

See the lineup for Series A here.

See it if you want to enjoy a refreshing, resonant, playful one-act (Sparring Partner) about a burgeoning office romance during a lunch in the park.

Don't see it if you aren't willing to withstand a promising, aimless let-down (The Plot) & half-baked, cliché-ridden play (IBIS) to get to the LaBute payoff

See it if you like well written short plays. Big impact;little wasted time.Acting/directing is uneven.Writing is all quite good.

Don't see it if you want something big & brassy.These make you think and feel.And for god's sweet sake, make the alarm clock face backwards or set it!

See it if You want to see a pretty diverse set of two-handers (well, mostly two-handers) that are solidly written, directed, and acted.

Don't see it if You dislike two-handers. Are looking for something edgy. While the plays aren't too light, they're far from anything edgy. Read more

See it if Ok, so series B, was overall better than A. "The Plot" had decent acting, but, needed a little more development. A little morbid of a plot

Don't see it if (Pun intended); it was the weakest of the 3. "Ibis" has strong acting from the 2 younger actors, but, the older male and his story killed it Read more

See it if Three short plays and I did not like any of them...Hope part B is better,,

Don't see it if Don't bother with this one...

See it if you want a grab bag evening - with three different shows in one night, you never know what you're going to get!

Don't see it if you dislike that this is truly three separate works. If there is any underlying theme or content connecting them, it does so loosely. Read more

See it if If you like short plays and/or new dramas, especially a good new LaBute play (that doesn't have his usual surprise twist BTW ...)

Don't see it if you hate short plays, only like familiar classics, or need to see big stars.

75
Better than series a

See it if you can't decide whether to see Series A or Series B.

Don't see it if you're not up for a 'pot luck' type of entertainment. Read more

"'Summer Shorts B' offers three distinct takes, some more enthralling than others...'Sparring Partner' is unquestionably the 'realest' of the three plays. While 'The Plot' and 'Ibis' each leave us with a sense of magic and mystery, 'Sparring Partner' mostly leaves us cold and straining to hear Jones as he vamps a one-sided phone call during a painfully delayed blackout. It's a disappointing way to be released back into the Manhattan August, but we're ready to cross that threshold all the same."
Read more

“Each of the plays depict intriguing stories about the human experience and portray fascinating interactions between people...With the finest writing, directing, and acting, Summer Shorts 2018 offers something for many theatrical tastes...It is an outstanding opportunity to be engaged by great shows that are now emerging on the theatre scene.”
Read more

"It takes an old pro to redeem the second series of one-act plays...‘Sparring Partner’...LaBute's script is admirably taut, with each little encounter inexorably pushing the couple toward a revelation...Less successful is Zajdel's ‘The Plot’...It has an eerily amusing black-comedy premise...But is undermined by a lack of action...If ‘Ibis’ disappoints, Berliner's direction keeps things fairly lively and the cast is fine...Even if two out of three plays disappoint, 'Season B' has plenty of rewards."
Read more

"The plays in 'Summer Shorts 2018 - Festival of New American Short Plays' have often had a theme running through all the offerings in each evening, however they were concealed or obscured. This year's Series B is about two-character relationships at a tense moment in their developments, sort of sparring partners as one of the plays calls it. Unfortunately, the plays in this series by Neil LaBute, Claire Zajdel, and Eric Lane all need further work as they are premises rather than finished plays."
Read more

"Only marginally better than Series A…A few amusing quips…aren't enough to compensate for 'The Plot' being a play in search of a plot…Equally lackluster is…'Ibis,' which begins in a film noir style…By the time 'Ibis' ends, we've moved from film noir to film blah…'Sparring Partners,' while a minor work about a conventional office romance, nonetheless lands one on the chin…A fine-tuned blend of script and performance in which each lifts the other to a higher level."
Read more

"Uneven...‘The Plot’: Groome and Robinson are full of neurotic angst but offer no sense of family cohesion, and Rees has little idea of where to steer his actors on the nearly empty stage...’Ibis’: Cleverly constructed dialog that feels mathematical...Broad turns in a charismatic performance...'Sparring Partner': The chemistry between Jones and Christie is perfectly tempered and Kandel brings sharp focus to LaBute’s view of the stakes and mistakes of playing a game too long.”
Read more

“‘The Plot’...A dark comedy...Some of the humor is too broad and the exposition of personality traits is too explicit...Lane’s enigmatic 'Ibis' explicitly addresses storytelling...Lane’s work is suffused with a haunting strangeness, and despite some minor kinks, this is the play that will stick most deeply in my memory...LaBute’s ‘Sparring Partner’, the most polished of the three plays, concludes the evening...Featuring terrific performances...The dialogue is sharp and naturalistic.”
Read more

"We were rather disappointed by the plays in Series A. We have just seen the plays in Series B, however, and we found them to be far more entertaining...'Ibis' is far and away the most convoluted and intricate of the three works – perhaps even a bit too much so for a one-act play...I found 'Sparring Partner' to be the best of the three plays, not only because of LaBute’s writing but equally importantly because of Joanna Christie’s and Keilyn Durrel Jones’s sparkling performances."
Read more