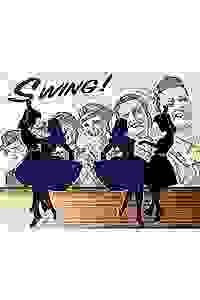 Swing! tells the story of Adrianna, a factory worker in the 40’s who is holding down her husband Butch’s factory job while he’s at war. Once he returns home, both Adrianna and Butch feel like they don’t fit into their old lives. When she meets Janine, Adrianna rediscovers old passions that she put away when she was first married. While her feelings blossom for Janine, Adrianna‘s love for her husband is also rekindled. Adrianna’s difficult choice in a time of forbidden love fuels this passionate musical journey. Featuring songs including “Swing Sisters,” “You’re a Stranger to Me,” “Fritz’ Bakery,” “Safe & Warm,” and the humorous “Be Mine.”

See it if Slow, amateur, weak score... Miss this one.

Don't see it if You want to be entertained. We struggled from the first moments (which completely didn't work)

See it if You enjoy a show comprised of short interacting skits along with musical numbers.

Don't see it if You are expecting a musical with catchy dancing or an interesting plot. Read more

See it if Enjoy a simple story from pastimes with music

Don't see it if Wants to be entertained with good story, good acting and singing, and appreciates some more effort into decor and costumes of the actors

See it if Do not recommend..