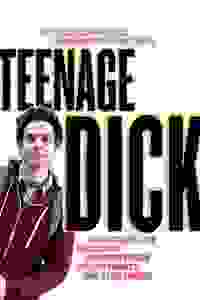 Ma-Yi, in association with The Public Theater, presents a new comic take on 'Richard III,' which reimagines the most famous disabled character of all time as a 16-year-old outsider in the deepest winter of his discontent.

Richard is in his junior year at Roseland High. Picked on because of his cerebral palsy (as well as his sometimes creepy Shakespearean way of speaking), he is determined to have his revenge and make his name by becoming president of the senior class. But as he manipulates and crushes the obstacles to his electoral success, Richard finds himself faced with a decision he never expected would be his to make: is it better to be loved or feared?  Tony nominee Moritz von Stuelpnagel ('Present Laughter,' 'Hand to God') directs.

See it if you like re-imaginings of Shakespeare. Great performances and clever staging. Fun and entertaining.

Don't see it if you need your Bard uncooked. Read more

Don't see it if You dislike plays set in high school with teenage characters.

Don't see it if you dislike direct address to audience. Or you want villain to repent. You needn't know RIII, but it enhances TD. Fascinating fun w/bite.

See it if Brilliant! I am not a Shakespeare lover but I loved this. The essence of Richard III. Accessible, funny, poetic, tragic & cruel.

Don't see it if You are not interested in Shakespearean characters in any form. You can’t stand the high school setting. You don’t like dark comedy.

See it if you like comedic riffs on Shakespeare (Richard III set in high school), support diversity in theater (esp. disabled), like acerbic humor

Don't see it if you don't care for any Shakespearean satires, don't like plays about high school, uncomfortable with disabled characters Read more

Don't see it if can only carry parallels btwn R's HS election & bloody rise to be king so far: cleverness turns to jokiness & production runs out steam

See it if you'd like a surprising show that modernizes one of Shakespeare's histories & explodes it to examine its parts through a contemporary lens.

Don't see it if you want to miss out on a cool experience.

See it if you want to see a reimagining and modernized version of Richard 111 with appropriate title; good acting and writing; inclusivity in casting.

Don't see it if you desire a purely Shakespearean script or you have Shakespearean expectations. This is a good modernization with some uneven turns.

“Though the play lands somewhat uncomfortably in the gap between simulacrum and satire, it includes scenes that are moving, exciting and profoundly eye-opening for audiences just beginning to see disabled actors onstage...Whenever Lew’s update questions or complicates Shakespeare’s assumptions, it is riveting...When the play tries to shift gears into a high drama of violence and self-violence, it quickly overheats...Still, I found the play exhilarating.”
Read more

"Mozgala is a winner of a malcontent as the title character in 'Teenage Dick,' Lew’s sharp modern-day reinvention of Shakespeare’s 'Richard III'...Lew’s script is suffused with Shakespearean references, but you don’t need to brush up on 'Richard III' to get most of the jokes, which tend toward the raunchy. Director von Stuelpnagel is adept at toggling between humor and heartbreak, as is the impressively diverse six-member cast. Ultimately, however, Mozgala is the one who rules the stage."
Read more

“Lew leans in to the Machiavellian subtext of Shakespeare's ‘Richard III’ for his high school-centric reinterpretation...Unsubtle character parallels...And yet, every implausibility is forgiven when the air of Shakespearean tragedy is exchanged for high camp...The play's strongest asset is its humor, and the company capitalizes on every possible second of it...Anne (and Villarin's self-possessed performance of her) becomes the most pleasant surprise of 'Teenage Dick'. ”
Read more

"The action sometimes lurches inelegantly between wisecracking comedy and full-throated melodrama, and it is debatable whether the dramatic structure can handle the tragic weight...But the playwright is already a master of caustic, crackling dialogue...Moritz Von Stuelpnagel's direction goes a long way toward papering over the stylistic cracks, and he has put together a cast skilled at takedowns and unexpected moments of tenderness."
Read more

"A first-rate production under the masterful direction of Moritz von Stuelpnagel...Richard's scenes with Anne are often quite touching, and despite the dark hue of the humor, 'Teenage Dick' is often quite funny. Overall, the play takes us on a wild roller coaster ride with a mix of well-earned laughs and jolting surprises...Put your trust in the uniformly splendid cast members and director Moritz von Stuelpnagel, who understands well the funny-scary world of troubled teens."
Read more

“A comical twist...Cleverly realized by its makers...For a goodly part of its 100 minutes, the play and snappy production are entertaining. Then abruptly and incongruously, everything slides down the drain into seriousness...No doubt the playwright intends to rock the audience with such a bitter ending, but coming out of nowhere as this conclusion does, the effect is more disconcerting than honestly dramatic...A cheerful little gloss on Shakespeare’s story that simply gets nasty."
Read more

“The serious and seriously terrific new ‘Richard III’ spoof...Well and tightly constructed — a thoroughly engrossing and entertaining play that zips through humor and pathos, building inexorably to its climax...Mozgala is more than a bit too old to be playing a high schooler, but his performance is a deeply affecting one...A well-paced, smoothly moving production that retains just enough scruffy edge...The ending is perhaps even darker than Shakespeare’s.”
Read more

"Add to this list Mike Lew's new witty and clever 'Teenage Dick' (being given its world premiere by Ma-Yi Theater Company in association with the Public Theater), both an update and a parody of Richard III now set in Roseland High School. However, while most of these other adaptations just want to demonstrate the contemporary relevance of Shakespeare's stories, 'Teenage Dick' has an additional agenda: does society's bullying lead to defining the personalities of those with disabilities?"
Read more