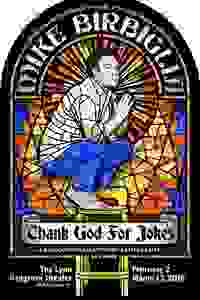 Mike Birbiglia declares that a joke should never end with ‘I’m joking.’ In his all-new comedy, Birbiglia tiptoes through the minefield that is modern-day joke-telling. Mike learns that the same jokes that elicit laughter have the power to produce tears, rage, and a whole lot of getting yelled at. Ultimately it's a show that asks, “How far should we go for the laugh?”

See it if you enjoy an intelligent stand-up performance. There isn't much important underlying content, but there are laughs.

Don't see it if you want rapid-fire jokes. This is storytelling...and some of it drags a bit. MB is sufficiently engaging, though, to pull it off.

See it if So funny. Well thought through. Delivery with perfection.

Don't see it if You don't like one person comedies.

See it if you like comedy developed from real life, told in warm and funny stories, by a pleasant appealing personality, enjoy laughing

See it if You enjoy Mike Birbiglia and/or like listening to long-form stand-up comedy.

Don't see it if You disliked Mike's piece "Sleepwalk with Me", don't enjoy comedians, or if you'd rather see a traditional play.

See it if Like comedy. Mike birbiglia is great. I heartily recommend it.

See it if you want to see one of our finest comedians at the top of his form.

Don't see it if your idea of humor runs to one-liners.

Don't see it if You don't like stand up comedy

See it if Long live Birbiglia!

Don't see it if It was really smart and funny. So I guess if that isn't who you are then....

"Humor is on Mr. Birbiglia’s mind...There is not an ounce of pedantry in his 85-minute monologue, an indescribably ridiculous collection of anecdotes and asides that miraculously blend into a whole…Mr. Birbiglia is hiding some serious ideas beneath the laughter. This isn’t just an enjoyable performance; it’s also an admirable piece of writing, so funny and yet so smart."
Read more

"While the material lacks 'Sleepwalk's' emotional punch, the writing and delivery is as sharp as ever...When he throws crowd work—admonishing latecomers—the teasing is quite endearing. Longtime fans might miss the more radio-friendly material, but Birbiglia makes a compelling argument for regular usage of the word fuck and earns forgiveness for straying from a reputation that was not always true to him."
Read more

"Comedian Mike Birbiglia tells stories, mostly about himself, which usually end with him being embarrassed or humiliated. And the more embarrassed and humiliated he gets, the funnier he is...Birbiglia delivers all this in a low-key, deadpan fashion, although he clearly enjoys making himself the butt of his jokes. And that enjoyment proves irresistibly infectious."
Read more

"It’s a common belief that analyzing what’s funny is not particularly funny. Mike Birbiglia proves the exception to the rule in his new solo show. The show places him among the top tier of smart-funny comedians whose humor comes from a sly, subversive and introspective place."
Read more

"Stand-up Mike Birbiglia has honed his latest piece on the road, and it shows: 'Thank God for Jokes' is incredibly effective. Yet it doesn’t feel over-rehearsed, thanks to the comedian’s laid-back demeanor — the show’s diabolically well-constructed but he looks as if he’s riffing off the top of his head."
Read more

"Sheepish self-effacement about questionable moves is an appealing Birbiglia hallmark....'Jokes follows Birbiglia’s Off-Broadway solo shows 'Sleepwalk with Me' and 'My Girlfriend’s Boyfriend.' It’s not quite up to those works, but it's always fun to be on-board when Birbigs, his social media handle, drives his clown car."
Read more

"You can't help but leave the theatre grinning…He casts a stark light on the thousand and one absurdities underpinning modern life…While you're laughing, you barely have time to notice how neatly he slips a few serious thoughts into the discourse…It's hard to not be moved by the deep feeling he displays for his hard-won talent and the laughter he shares."
Read more

"'Thank God For Jokes' is a carefully crafted ramble where every destination is appealing and all roads eventually converge and lead to a satisfying destination...It is Birbiglia’s verbal peregrinations that enchant. In this consistently funny and smart show he seems to tangentially wander topic to topic, but this is a very carefully mapped out journey — one where the various stories all tie together to make a point about the sanctity of the free speech that are jokes."
Read more