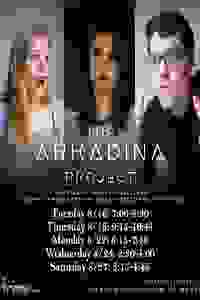 Part of FringeNYC: The Arkadina Project is a modern adaptation of Anton Chekhov’s “The Seagull”. Follow Kostya, Nina and Masha on their struggles with celebrity obsession, unrequited love and parental suffocation. Adult, witty, and makes you feel guilty for laughing so hard.

FROM THE ARTIST:
Arkadina Project is one of the few shows that have been selected for the 2016 International Fringe Theatre Festival. FringeNYC, the largest multi-arts festival in North America, will present the 20th Annual Festival from August 16 – 27, 2016.

TAP is a comedy so dark you'll feel guilty for laughing so hard. With high-tech elements such as live go-pro performances, actors lit entirely by cell phones, and a set dressed with projections the audience is sure to forget this was once considered a classic.This hilarious, high-tech modernization of Anton Chekhov’s “The Seagull” follows Kostya, Nina and Masha on their struggles with celebrity obsession, unrequited love and parental suffocation. Sex Scandals, Sell Outs, and Smirnoff. But no Seagull.

Don't see it if you don't understand, or don't want to remember the trauma that teens feel.

See it if You've seen or read The Seagull or read the Wikipedia entry, and are curious what a modern version with social media would be like

Don't see it if You're sick of mediated communication (altho that's the point), or you have low tolerance for decent concepts that aren't quite there yet

See it if really fun

Don't see it if stuck-up

See it if You enjoy dark comedies that make you think while you laugh, or if you're interested in a brand new, modern take on an old classic.

Don't see it if You feel uncomfortable with adult themes and foul language.

See it if You enjoy dark humor, Chekhov, and heart wrenching emotions that will make you bi-polar. A Great piece of theater that I thoroughly enjoyed

Don't see it if You hate dark humor, Chekhov, and heart wrenching emotions that will make you bi-polar.

See it if You enjoy thought provoking theatre regarding important topics affecting our country, particularly if you are interested in race relations

Don't see it if You want fiction or a plot per se. This is an auto-biographical piece by a husband and wife about their relationship.

See it if If you love slow long drawn out movies

See it if You like modern day adaptations of classics. You appreciate dark humor.

Don't see it if You are easily offended by raunchiness and dark humor.

"The writers took a risk with a piece that plays more like a spoof than an adaptation. Chekhov die-hards might find its deviation difficult to digest; others may find it amusing. But the makers behind this production are well aware that it is, indeed, not for everyone. Nonetheless, with a retelling or modernization of an old piece, there is an opportunity to capitalize on the exigency of the story in its new context: why this play now? I wished to have a better understanding of the stakes."
Read more

"Top-notch quintessential fringe…'The Seagull' is the template, and they run with it like running with scissors. The solid script, updated with a bad mouth and attitude, allows the huge reflex to comedy to float above the tragedy…There's precision direction, four all-around excellent actors, fluid minimal set, and a smart structure… If you know Chekhov's 'Seagull' you'll appreciate the echoes. If you don't, you'll applaud the sheer entertaining theatricality."
Read more