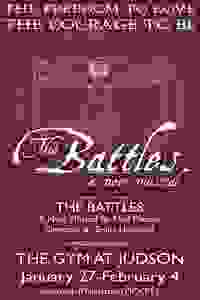 The Battles NYC Reviews and Tickets

Inspired by a historical event, this world premiere musical dramatizes an art competition between rivals Leonardo da Vinci and Michelangelo.

Florence, Italy, circa 1500: Leonardo da Vinci and Michelangelo, the two greatest artists of their day, engage in a head-to-head painting competition, battling not only each other but their own doubts and demons. 'The Battles' explores the struggle between the courage to love and the retreat into fear. It’s a story of fighting against both the walls we erect as a society, and the walls we build around our own hearts–walls that keep us from becoming all we can be. It’s a battle that continues to this day.

See it if the theme is fascinating. The music is very enjoyable. Perez & Burnside are spectacular!! WOW! Kudos to the ensemble also! Absorbing.

Don't see it if Massey as DaVinci is a disaster! Embarrassing "performance", mediocre singing. Sometimes saccharine. At least 2 songs in act 1 can be off. Read more

Don't see it if You don't enjoy seeing new shows in workshop phase. Could use trimming. Read more

See it if you love a great concept and great talent. First 99 rating by this lad.

See it if You want to see a new musical in the early stages of development. You enjoy modern interpretations of historical events.

Don't see it if You want a clean, sharp production: the story & music don't get going until the end of Act 1. You prefer traditional staging &interpretation

See it if you enjoy interesting new musicals with varied musical styles, contemporary staging, minimalist costumes, and a history lesson thrown in.

Don't see it if you dislike minimalist musicals, non-traditional music and staging; you are homophobic; you are not a fan of either Michelangelo or DaVinci

See it if You enjoy new musicals with well made songs. Good singing, interesting sets.

Don't see it if You expect a real story. This bounced around and "the Battle" only mattered for about 15 minutes. Otherwise it was a rather banal love story Read more

See it if You’re up for a musical with 36 songs that start off with Darkness & Chaos & never gets to the light. A well presented show that needs work.

Don't see it if You're homophobic, need structure, don't like hybrid musical scores and/or have no time for Renaissance art, artists or their problems. Read more

"The famous battles between these two great artists are in fact much more personal here. And it works. If you’re like me, however, you’ll wonder why musical theatre was the right medium for this story...Where the show fits the classic mold, it also notably departs from convention. For one, it’s unapologetically, refreshingly queer...This story is intimate and relatable...Perhaps it’s too sleek and intimate for the collection of showstoppers that the score wants to be."
Read more