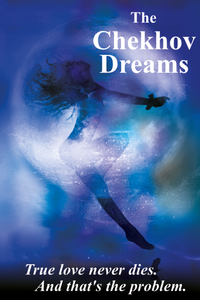 In 'The Chekhov Dreams,' Jeremy’s fiancée has it all – beauty, intelligence, beguiling charm. She’s also dead, but that doesn’t stop her from visiting him every night in his dreams. This blissfully aberrant arrangement unravels with the interference of Jeremy’s hedonistic brother and his overly enthusiastic acting scene partner, with whom he’s stuck working on a scene by Chekhov – the one writer he loathes. Worse yet, this actress is starting to arouse the jealousy of his betrothed just as she’s beginning to reveal her true powers. Jeremy’s fiancée may be to die for, but will he go that far?

Don't see it if Indulgent and belabored at times. The young girl was unconvincing. Would have preferred a more ambiguous ending.

See it if you like an amusing play with very funny situations. Excellent set for a small stage. The dialogue is very entertaining. Good characters.

Don't see it if you do not like comedy or romance. Read more

See it if you want a very well acted and intelligent modern comedy paralleling Chekhov's "The Sea Gull." Delightful from beginning to end.

Don't see it if you want to miss one of off-B'way's surprising delights.

90
Great fun and a little challenging

See it if you love good comedy, a little goofy yet intelligent.

Don't see it if you don't like mysterious apparitions. Otherwise it is great. Read more

See it if You enjoy a well crafted intelligent romantic comedy.

Don't see it if You have no imagination and no romance in your soul.

Don't see it if You are unfamiliar with Chekhov

See it if you believe in life after death, lol. Want to see well-acted and engaging play about the intra-psychic difficulties of surviving a spouse.

Don't see it if You demand clarity and logic in theater. Read more

See it if don't mind rambling, drawn out plays about self involved people. The cast works hard and the direction is fine.

Don't see it if are looking for a play that is worthy of the issues touched upon here.

"A delightful, humorous romp through eternal love and the literary life in a production which abounds with zany and fanciful twists...This intriguing and always spot-on play is a unique entertainment...The ensemble’s work is seamless, believable, and integrated in revealing the story...Leslie Kincaid Burby elucidates the production masterfully with enlightened interpretations, fine staging and specific, moment-to-moment direction."
Read more

"Dana Watkins reaches into our hearts as the man inconsolable in his longing for what once was a perfect love...Elizabeth Inghram is the perfect dead lover...While this might seem like a chick flick or a mindless sitcom, there is more than meets the eye and ultimately this show is completely satisfying...This is a show that will make you like life and be glad that you went to the theatre. I recommend this show highly."
Read more

"You can't help but enjoy' The Chekhov Dreams', a dark and witty world-premiere rom-com...Examines the psychology of love, life, loss, and dreams, in a clever contemporary mash-up of Chekhov’s 'The Seagull' and Hans Christian Andersen’s 'The Snow Queen'...Burby directs with mordant humor, underlying sensitivity, and engaging blocking...She fluidly navigates through the script's surprising shifts in mood, from fantasy to reality, risible behavior to demoralizing pain."
Read more

"A humorous play that is not for every humor. A modern twist on Chekov’s 'The Seagull,' its jokes rise and thrive on your literary knowledge, and how intellectually stimulated you need to be for a laugh...It still only heats up those that LOVE classic novels and devour any chance for a pretentious snide...A charming cast...First half may wane a little bit in holding everyone’s interests. Yet, its second half is excellently paced, and grabs your attention."
Read more

"Though it’s in need of some judicious trimming, John McKinney’s engagingly surreal romcom largely succeeds in building a delectable Dagwood sandwich of multiple genres, archetypes, and conventions...The wit and tenderness with which McKinney renders his vibrant characters give the audience both an enjoyable ride and something to talk about after the curtain falls...Watkins provides the show with a solid emotional core."
Read more

"This turned out to be quite a charming romantic comedy with a twist. There are things I could pick apart - a somewhat inconsistent engagement with mental illness, or how the women still rather felt like props to the male narrative - but these are things which came up more for me after the show rather than during it. During the show, I was engaged and amused, laughing and investing in the characters on their journey...The ensemble here is terrific."
Read more

"Everything appears to be just as it should be...Yet in spite of all that there's something just not right overall...The cast is a talented lot. While each player plays their part the problem with the ensemble is one of what appears to be nervous energy...There's also that unwavering feeling of trying too hard to please..The entire show runs a bit too long...There’s a gem of a show to be mined here but the excavation would have to go deep."
Read more

"McKinney's dark, romantic comedy will fulfill all those theatregoers who enjoy Chekhov or yearn for a classic Greek tragedy...The design team work cohesively to add intrigue to the backdrop and with the characters of the play to successfully reinvent Chekhov's usually depressing ending; instead we are left feeling optimistic about love and a connectivity in life and hope for living another day...A compelling, well-produced and acted play, and deserving of a longer run."
Read more