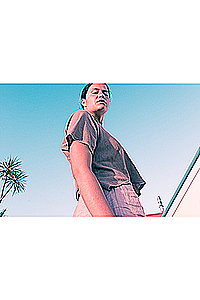 View in admin
The Contours of Heaven
NYC: Soho/Tribeca
73
Score it Scored!

The Contours of Heaven NYC Reviews and Tickets

Based on interviews, this solo work melds theater, dance, song, looping, and honest discussions about the reality of New Zealand.

The Contours of Heaven is a verbatim work based on interviews with 6 rangatahi in the Hawke's Bay across a period of months. This work was created between Puti Lancaster, Ana Chaya Scotney and Marama Beamish. It melds theatre, dance, song, looping and honest discussions about the reality of New Zealand. It's a work that looks out to the world and brings the world into the theatre.

Structurally the show works as a solo work of 50 minutes long, with an open facilitated conversation for at least 10 minutes at the end between the audience, director, performer and operator. This space opens up the floor for responses and respects the audience as active members in the work and is often followed by at least 30 minutes of hanging out in the space and discussing. This slow decompression is important and a beautiful element of how the work functions as a community event.

Technically it's a very simple show with Ana making all the sound live onstage with a loop pedal and mic, and the lighting design as a scalable element.

See it if you would like exposure to New Zealand performance art-here a solo show by a young artist singing, story-telling, dancing and making sounds

Don't see it if you want a truly comprehensible story-this is 6 vignettes that pass quickly and may not be all understandable. Introduction hard to hear.

See it if Kiwi mult-role solo w/ interp movement. "All the passages roll by." Heartbeats, gulls, and waves are vocalised and then repeated in playback

Don't see it if Age and gender roles are indistinct and only 45 min. "What determines becoming you?" Better in vocal manipulation than actual recitation. Read more

See it if Six Character shorts with dance movement and making sounds.

Don't see it if Clear story or play. Read more

See it if You want a series of young Maori character sketches incorporating movement & sound looping performed by a crazy talented actress.

Don't see it if You want a play w/a story: this is more sketch/performance art.You dislike movement-based work.You're not interested in modern Maori culture

See it if One woman performing stunning dance, vocals and(forgive me) beatbox which create an ocean with gulls diving into the waves on an empty stage

Don't see it if I found this, and the Encounter, to be a bit too redundant. These are seriously talented people with stories to tell but my attention waned Read more

See it if A New Zealand actor of Māori descent plays multiple characters of young people coming of age in a small town in South New Zealand.

Don't see it if Experimental and symbolic theater is not you kind of theater. Read more

See it if you want to explore culture, emotions, lifestyles, thoughts of h.s. seniors in Hawks Bay, New Zealand in their words through performance art

Don't see it if you are not interested in New Zealanders, native or otherwise, one woman performing artist portraying male and female roles, several stories Read more

See it if Disappointing one woman solo performance depicting 6 young people coming of age in New Zealand. Heavy accent made it confusing at times.