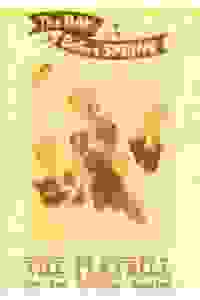 View in admin
The Day Before Spring
NYC: Midtown E
76
Score it Scored!

The Day Before Spring NYC Reviews and Tickets

The York revisits one of Lerner and Loewe’s lesser known musicals, in which a married woman attends a college reunion where she meets the man with whom she almost eloped ten years before.

Romantically stirred by a novel he has written about her, she considers leaving her husband and reuniting with her former flame. With a score that was never recorded, moments of "The Day Before Spring" served as inspiration for such Lerner and Loewe classics as "Gigi" and "My Fair Lady." This production will feature all of the songs from the original score after recently being discovered for a 2010 UK production.

“The Day Before Spring” is part of The York's "Musicals in Mufti" series,  a series of script-in-hand, concert revival readings presented in everyday clothes and with minimal staging.

See it if you like breezy musicals. TDBS has a silly plot/cardboard chars, but the songs and performances are delightful. Barebones prodn/90 mins

See it if Really bad acting. Actors went on with script. Singing drowned out by music. If you like the Mufti s.

Don't see it if If you like a musical with a good story. Musicians should have been behind the stage. Bad directing.

See it if You love traditional musicals. This is a very sweet story exceptionally well done. You are curious about the earlier musical of Lerner/Lowe

Don't see it if You are expecting an earth shattering show. You have no interest in the earlier works of Lerner and Lowe.

See it if An early Lerner and Lowe that never quite came together. A nice little romantic comedy story.

Don't see it if None of the songs are very appealing or memorable.

See it if for historical reasons to hear an unrecorded lerner/loew score.

See it if only for the only great song in the score. Alas, it's closed, but whenever you can catch one of these obscurities by a master, do so!

Don't see it if you're expecting more than a sweet story about a romantic woman's dilemma in the 50s, no doubt influenced by the Kinsey Report.

See it if You want to see where Lerner and Loewe began, with some hints of what was to come...glimpses of themes that will become MFL

Don't see it if Mufti is what mufti is...no frills, under rehearsed , but full of energy

See it if you want to see a little, short musical that feels like it's still living in 1956.

Don't see it if you want to see something with real substance.

“The last musical by the composer of sumptuous melodies and the scribe of urbane wit that would lapse into obscurity...Acito directs the buoyant new mounting, a 90-minute one-act for eleven actors...Parks sings with a fluttery operetta-like soprano that beautifully embraces the old-European charm of Loewe's ballads. Reynolds is appealingly dorky...and Manocherian portrays Alex with a fine, adventurous swagger.”
Read more

“A show that is struggling to establish an identity, it suddenly--if briefly--develops a sharp, satirical slant and a jaunty, couldn't-care-less attitude that simply can't help but cheer one up...’The Day Before Spring’ has a decent number of chuckles on hand...But...the fun is entirely ancillary to a plot that nobody involved seemed able to keep in mind...The musical has a tendency to wander...With all these tangents, the triangle at the heart of things never gets the attention it requires."
Read more

"What is revealed at the York is the work of writers well on their way towards maturity. A few of the songs are quite nice...Adaptor/director Mark Acito appears to honor the original, carefully preserving what seems to be the voice of librettist Lerner...Acito adds jokes about McCarthy, Davey Crockett, and even Brigadoon, which don’t enhance the entertainment...Even so, these are minor carps given that Acito has managed to make a compelling argument for this forgotten show."
Read more

"The York Muftis perform a terrific service reviving worthy shows in 'street clothes, without the trappings of a full production,' shows that might never be seen again. Marc Acito's revival is a valiant effort but in this form 'The Day Before Spring' seems both thin and underplotted even for a light romantic comedy. Now if only an original cast album would come out of this production, we might see more revivals restoring the show to its place in the Lerner & Loewe canon."
Read more

"None of it is terribly convincing, and the songs, though some lovely, and one or two clever enough, never successfully lift the show out of the doldrums...Lerner’s underlying cynicism makes most of the characters not very appealing to spend an evening with. That only extends so far as the writing, as the actors—with a mere thirty hours of rehearsal—were happily engaging to watch."
Read more

“This early Lerner and Loewe charmer...Has real music, real humor and real heart. ‘The Day Before Spring’ is charming without being trite, and in this adaptation...the excellent performances and direction give it life, celebrating the material in all its quirkiness and familiarity...Lightning does strike in the casting...Parks shimmers with the kind of classic leading lady glow that you cannot manufacture...Reynolds, as her husband also possesses the ‘it’ factor that draws the eye.”
Read more

"It is easy to see how the musical as originally staged might have been moderately enjoyable but not a smash hit. However, it is quite charming in this intimate 90-minute intermission-less concert-style version in one act. The York has assembled an excellent cast capable of coming through effectively after a week’s rehearsal. The performers manage to eclipse the thinness of the plot that makes this a very minor Lerner-Loewe collaboration."
Read more

“Lerner and Loewe’s poetically-titled ‘The Day Before Spring’ is lovingly restored...Acito adapts the musical into a one act...and make it as appropriate and digestible for the present as is likely possible...The melodic score and witty book are welcomed surprises, as is the alchemy of Acito, which makes theatrical gold from briefly rehearsed, low-budget ‘Mufti’ trappings, cleverly utilizing the space, crafting a singular tone, and eliciting comedic and heartfelt performances from the cast.”
Read more