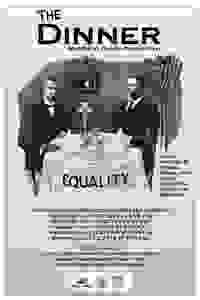 The Dinner NYC Reviews and Tickets

Part of the Midtown International Theatre Festival, 'The Dinner' is a new musical that chronicles the political fallout following Booker T. Washington and President Roosevelt's shared dinner at the White House.

'The Dinner' begins with the aftermath of an innocent act by two great leaders -- who chose to eat at the same dinner table at the same time. The furor spread like wildfire and provoked an outpouring of vulgarities and racial hatred from southern politicians and noted press. Newspapers printed degrading poems and others wrote "coon songs." 'The Dinner' also features narrative, original music, dance, and the words of Booker T. Washington and Theodore Roosevelt.

"'The Dinner' is a must-see show that walks a tightrope between harsh reality and comforting hope as it concerns racism in the United States of America."
Read more