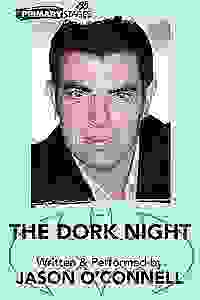 Primary Stages presents Jason O’Connell’s solo show tracing the ups and downs of his life through the prism of his love/hate relationship with the 'Batman' movies.

A look into one man's obsession with movies about another man's obsession with dressing up like a rodent and punching people. The Dork Knight traces the ups and downs of actor Jason O’Connell’s personal and professional life as seen through the prism of his love/hate relationship with the Batman movies. Featuring numerous “cameos” from the bat-voices in his head, O’Connell takes us on a trip down cinematic memory lane that begins with the 1989 Michael Keaton blockbuster, and strolls past George Clooney’s bat-nipples, Christian Bale’s bat-growl, and a couple of iconic Jokers en route to (sigh) Batfleck. This funny, intimate memoir demonstrates how one’s “inner geek” can guide and inspire in good times and in bad. The Dork Knight contains adult themes and language. Not recommended for ages under 13.

See it if you are at least familiar with the most iconic Batman movies of the last 30 years. Very well written and performed. Absorbing, intelligent.

Don't see it if It's a niche play that requires some prior knowledge of the subject. One man shows at small venues are not your thing. Read more

See it if You’ve ever felt like what was on the inside is more important than what’s on the outside. Funny. Inspirational. Clever. Smart. Current.

Don't see it if This was a GREAT show, even if you hate one person shows I would urge you to take a chance on this one, that might be only reason not to go. Read more

"It’s not O'Connell's alter ego as a Dork Knight that makes for the biggest reveal of the night — but rather the fact that within this small solo piece is hiding one of New York's finest undiscovered actors…The passion with which O'Connell extols the virtues of Batman mixes an intoxicating Kool-Aid for even the superhero averse...O'Connell is a remarkably honest performer and writes himself a candid, hilarious, and surprisingly moving monologue to match."
Read more

"The whole my-life-as-a-Bat-fan concept becomes strained after a while. Some of the humor doesn't land as strongly as it might, although this may be because O'Connell is still honing his delivery. Still, the actor is never less than engaging...Tony Speciale's staging has a casual intimacy that makes 'The Dork Knight' easy to like...What keeps 'The Dork Knight' engaging throughout is O'Connell's honesty, which sometimes approaches the self-lacerating."
Read more

"Why shouldn't what we love represent who we are? In his sparkling one-man play, O'Connell explores this idea with both a seriousness and a hilarity that will make you reconsider your own devotions...Humor is his chief building block...But he can be effortlessly moving, too...Which isn't to say it's perfect...O'Connell is at his enviable best when he drops the costumes and lets his underlying humanity speak for itself. Luckily, that happens frequently enough to keep 'Dork Knight' richly involving."
Read more

“This raw, funny, intense, and magnetically performed autobiographical solo show is at times a draining experience due to its fierce personal revelations that are imparted in a confined space…O’Connell’s script is a well-structured series of confessional anecdotes interwoven with the lore of the movies. His performance is a riveting blend of stand-up comedy and grand stage acting with Shakespearean flourishes…'The Dork Knight' is an engrossing work of therapeutic entertainment.”
Read more

“What sets O’Connell apart is both his desire and remarkable ability to inhabit—and ape—the central characters of that film. I defy anyone to find a better Michael Keaton impersonator anywhere…'The Dork Knight' doesn’t stand out for its story, for it’s a familiar one…Rather, it’s O’Connell’s personal insight into how these films reflect, reveal and develop his personality and, more importantly, his love for, and remarkable skill at, acting.”
Read more

"A hilarious celebration of the Dark Knight and his fans…His intimate performance brings out the humor of the connections he draws between Batman and his life, keeping the audience laughing all while maintaining the contemplative and discerning tone that lends the play more significant dramatic weight…A hilarious concept made profound with its vulnerable, honest performance, 'The Dork Knight' is must-see theater for fans who grew up on superheroes."
Read more

“O'Connell...brings his endearing personality, abundantly versatile voice, and emotional depth to this autobiographical account of the role Batman-especially the movies-played in his life...Smartly staged by Tony Speciale in the three-quarters round..., exceptionally well lit by Zach Blane, and supplemented by (uncredited) sound effects, 'The Dork Knight' is a perfect vehicle for the personable O'Connell to demonstrate his considerable range as both a comic and serious actor.”
Read more

“'The Dork Knight' is a funny and touching 90-minute show that is heartbreakingly profound as it shows us just who Jason O’Connell is. From this show I gained a respect for Mr. O’Connell, both as a storyteller and an actor. When he becomes Heath Ledger as the Joker, I longed to see O’Connell play some darker roles as he scared me in a good way with his performance. O’Connell is one terrific actor and this is one terrific show."
Read more

"O’Connell is a good storyteller and an adroit writer...With candor, sweetly self-denigrating humor, and cultural perception, O’Connell is telling us the story of one boy’s growth and coping mechanisms…My single caveat is O’Connell’s schizophrenic, multi-impersonation denouement...It’s nigh impossible to get that many distinct portrayals right with rapidity, an onslaught, and unnecessary to the show...Director Tony Speciale has done a seamless job. Gestures work. Pacing is pitch-perfect."
Read more

"’The Dork Knight’ pays homage to the DC comic character while showcasing O’Connell's intimate storytelling skills and his prowess for impeccable characterizations…Between his strong writing style and his hypnotizing charisma, O’Connell found a way to stage his greatest assets. O’Connell’s impressions are comedy gold…'The Dork Knight' is one of those rare solo plays that has the power to engage an audience from start to finish."
Read more