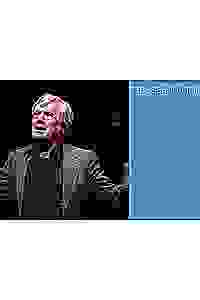 The Gospel of John

St. John’s Gospel is breathtakingly poetic, containing soaring theology, yet it is filled from start to finish with eyewitness details that came from John’s life with Jesus. For over 2,000 years, this written testimony from John’s personal experience has been proclaimed all over the world.

Ken started memorizing The Gospel of John as a spiritual practice during a difficult time in his life. He always had an affinity for John, which seemed to him to truly be a firsthand narrative by a man who was actually there. So he memorized it. To make it theatrical, he made a few cuts for time, which he cleared with a Jesuit priest, an Episcopalian priest, a Baptist minister, and a sister of the Sacred Heart — all encouraged him to go on with his presentation.

Ken will tell it to audiences as if for the first time, as it was originally told by the Beloved Disciple — so that they too may have a personal encounter with Jesus during this Advent-Christmas season.

See it if fan of Ken Jennings, interested in this Gospel, are a Christian, enjoy 1-person shows, have seen performances of other Gospels (ie. Mark)

Don't see it if Not a Christian or interested in the Gospels, don't enjoy 1-person shows, uncomfortable around religion, not familiar with John

See it if as an alternative to all the holiday hype. Ken Jennings does an astounding job of creating a personality for each of the speaking characters

Don't see it if you find Biblical text repetitious to the point of irritation. The fundamentals of Christianity are represented if that's a problem for you

See it if Powerful performance on the topic of Jesus Christ’s adult life thru one performer. His performance spoke of truth and strong beliefs.

Don't see it if You don’t want to watch a performance on the topic of Jesus Christ.

See it if you're a "Believer"-Christian & especially Catholic; you want to hear a virtuoso recitation of the Gospel of St. John by a good actor.

Also IMO, Jennings overdoes the "ordinary man" approach. Someone else should give the required announcements, where fire exits are, etc. And the way he was dressed was off putting.... Read more Read less

See it if you're Roman Catholic; you've never heard "The Gospel of John" spoken aloud; you're a New Testament fan; you've ever wished for a miracle

Don't see it if you're expecting a traditional play with scenes, costumes, a large cast instead of a 2-hr recitation by one actor; you're an Atheist

Also Though his solo show highlights Jennings' trained memory, he fails to distinguish his protagonist, Jesus Christ, with his voice.

As a result, Jesus of Nazareth sounds too much (for ex) like the Samaritan woman drawing water, Mary Magdalen, Nicodemus, etc.

While I admire such dedication to a "passion project," I wish the director had guided Ken Jennings to create a unique voice-print for Jesus -- instead of the understated tones used for lesser characters in this Biblical pageant.

See it if you want to be inspired by the WORD and that someone would memorize the complete Gospel of John and share it with an audience.

Don't see it if you are not a fan of the BIBLE or dislike one man performances.

See it if You want to see a master craftsmen grab his audience as he speaks the language of the Bible.

Don't see it if You do not like solo performances.

See it if you want to watch the life of Jesus unfold before you in this moving, verbatim dramatization of the Gospel of John by a consummate actor.

Don't see it if You don't enjoy solo-performances, a minimal set, or the subject matter which is essentially a Christian scripture with theology and dogma.

Also I caught the opening day 3PM performance by Ken Jennings in the Gospel of John at the Sheen Center, and it was truly an extraordinary, well-acted, riveting experience. The Gospel came alive and one could actually feel that the scriptural characters were on the stage in front of you, including Jesus, even though Ken was acting out all the roles in this solo-performance. Ken is obviously a devout Roman Catholic and he presented the Gospel like a prayer. It was a very inspirational performance. On the other hand, it is understandable that there may be some who are not interested in a solo-performance with a minimal set on a Christian book of the Bible which obviously includes Christian dogma and theology. Nonetheless, even for non-Christians, I would recommend this highly moving, inspirational, educational play on the life of Jesus presented by someone who most assuredly has a passion for what he is doing and clearly absorbed the audience into his deeply felt, sincere personal experience.... Read more Read less

See it if you'd enjoy seeing a Biblical text in a physical way. With some staging and lighting, the words come to life in a different way than read.

Don't see it if You do not like one-person monologues with some voices of different characters, or will fall asleep. It was about 2 hours long,

See it if If you love good theater this is a must see. Ken Jennings transports you back in time making one feel you are actually there.

Don't see it if If all you like is big Broadway productions, this might not be the play for you.

Also I was completely absorbed by the masterful storytelling by Ken Jennings. Ones imagination is alive with this dramatic presentation. Don’t shy away from this if you think biblical stories are not for you. You will be rewarded, educated and entertained.... Read more Read less

See it if Like great acting with a powerful message.

Don't see it if Don't like solo acts with minimal staging.

See it if you have an interest in the Bible or Christianity.

Don't see it if you don't like a one-man play or if you have no interest in a play based on the Bible.

See it if If you enjoy religious works and want to feel deeply moved. Mr. Jennings is masterful with a full memorization of the Gospel.

Don't see it if You are adverse to religious works. Are unable to stay in your seat for almost 2 hours. Don't enjoy 1 person shows.

See it if you’d like to experience a heartfelt recitation of a truncated version of the most literary of Gospels.

Don't see it if you are expecting much more than a recitation of the (truncated) story of John’s Gospel.

Also The opening of John’s Gospel is the most inspired stretch of “writing as writing” you’ll find in the 4 gospels. Among its famous utterances: “In the beginning was the Word,” and “And the light shone in the darkness & the darkness grasped it not,” and “And the Word was made flesh & dwelt among us.” (As translated in the Catholic mass of my youth.) Even after the story kicks in, John’s literary chops remain strong, & his gospel recounts several miracles not mentioned elsewhere. So I thought it might prove powerful transfigured as drama. I didn’t find it so here. At nearly 2 hours, the recitation felt narrow. In the unvarying, insistent voice the actor uses for much of Christ’s direct address, I heard little of the profoundly human tone that distinguishes this most human of ancient philosophers. (I also missed the deep ethical teaching we find, for example, in The Sermon on the Mount in Matthew’s telling; but for that absence, John, not this production, is responsible.)... Read more Read less

See it if You want to see an incredible acting display.

Don't see it if You don’t have any interest in the Bible.

Also For any of us that grew up in a religious home, we became religious because of our parents. I still try to go to church as much as I possibly can because I know it makes my mother happy. I never understood Shakespeare and I could never comprehend the Bible. When I go to church I hear the words coming out of the priests mouth during the gospel but I can never really comprehend them. Today I was able to visualize and comprehend most of what I heard which is an incredible feeling! Not only is Ken Jennings an incredible actor but because of him I now feel like I’m finally able to understand something from the Bible for the very first time in my entire life. I really wish there was a way for kids to learn religion this way. I always felt like I was being punished when I had to go to church or CCD. No one forced me to go to this today and I understood and enjoyed it. There wasn’t much sound or lighting but what they did was brilliant... Read more Read less

See it if You are religious or are interested in the book of John in the Bible, or enjoy one man performances

Don't see it if You are expecting to see a traditional play or musical, want to see a lavish production or don't like the Bible

See it if Ur an advocate4 transparency &yearn for the truth.Then,disregarding pref x religion you'd enjoy the perform of a reduced,yet illuminating *

Don't see it if No interest in the Bible as a literary masterpiece or you negate openess to religion and geo/ethnic reason.

Also *version of the most poetic of the Gospels.

See it if It seems like it’s Ken Jennings’ passion project. Great story telling, whether you are a religious person or not, you’ll be engrossed in it.

Don't see it if You don’t like a solo play or the Bible story.

Don't see it if u don’t like flawless acting, one man shows that bring back memories of innocence and true faith, the bible

See it if you are an artist, actor, seeker or explorer who enjoys a masterful inspirational monologue of spiritual significance. Very moving.

Don't see it if 90min no intermission, solo work, no set, you are triggered by Christian dogma/mythology told with great passion

Also I was completely emotionally absorbed by the masterful storytelling & familiar beloved quotes. This little show was a great Christmas present to myself, and it would be wonderful if it could tour & be presented all over. I am spiritually expansive in my beliefs & not affiliated with this production. A genuine thankful "100" from me.... Read more Read less

This Week on Broadway for December 8, 2019
Broadway Radio 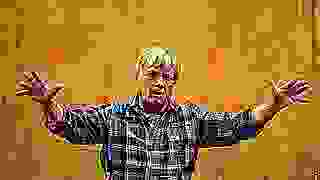 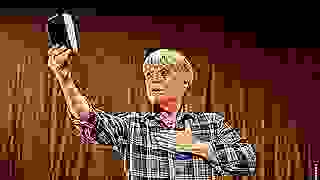 Ken Jennings in The Gospel of John © 2019 Maria Baranova 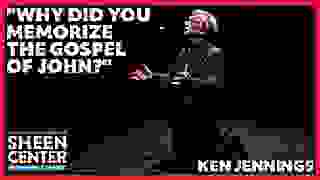 Interviews with Ken Jennings, star of "The Gospel of John"