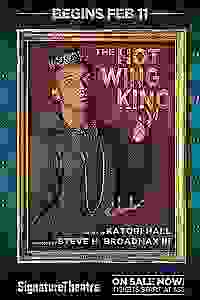 Ready, set, fry! It’s time for the annual "Hot Wang Festival" in Memphis, Tennessee, and Cordell Crutchfield knows he has the wings that’ll make him king. Supported by his beau Dwayne and their culinary clique, The New Wing Order, Cordell is marinating and firing up his frying pan in a bid to reclaim the crispy crown. When Dwayne takes in his troubled nephew however, it becomes a recipe for disaster. Suddenly, a first place trophy isn’t the only thing Cordell risks losing. Steve H. Broadnax III will direct this sizzling world premiere comedy from Residency 5 playwright Katori Hall (Hurt Village, Our Lady of Kibeho).

See it if Hall's most comedic endeavor; not w/o its serious side Well staged & very well acted which balances the more overwritten aspects of dramedy

Don't see it if unchallenging; never rises much above sitcom genre; conclusion: gay men are like the rest of us (but more fun) is not earth shattering

Don't see it if No major, heavy plot. Gay love annoys you: each time men kissed, the homophobic(?) woman next to me commented. 2.5 hours with intermission. Read more

See it if You are interested in a gay group of friends and lovers exploring their place in life. Good acting but writing straight out of tv.

Don't see it if You want something deeper and less cliched.

See it if An enjoyable play depicting relationships among gay black men and with one's straight male relatives. The hot wing contest preparations

Don't see it if The subject matter doesn't appeal to you. Read more

See it if you're a fan of Katori Hall's work and/or you want to see a story that has some genuinely funny moments and some truly touching ones, too.

Don't see it if you want a consistent show. This is a mix of comedy and drama that are only somewhat compelling, and the tonal shifts don't quite work.

See it if you would enjoy a comedy about a houseful of black gay men with a couple of serious subplots. Good actors and many entertaining moments.

Don't see it if you will be upset by dialect that is sometimes hard to understand or you have no patience with plays that are clearly too long.

"In ‘The Hot Wing King,’ a New Recipe for a Family: Katori Hall’s genial play, built around a cooking contest in Memphis, uses a sitcom structure to explore black masculinity."
Read more

"Katori Hall gets belly laughs out of this domestic comedy about an amateur cook trying to create a signature dish while chaos reigns in the kitchen."
Read more

"Spicy Family Drama: Katori Hall’s latest is the best example yet of her down-to-earth stories bursting with truth"
Read more

"The Hot Wing King Is Spicier Than a Suicide Drumette: Katori Hall's new play is about a circle of gay black men in Memphis, Tennessee."
Read more

"Simply transposing standard tropes from gay plays and planting them in an all-black milieu doesn't result in anything remarkably fresh, and certainly not anything particularly flavorful."
Read more

"Hall's 'The Hot Wing King' does not push the boundaries of theatrical form and style in ways that other shows have, but it is certainly a viable contender. In its unabashed treatment of sexuality, masculinity and race, it is a play to be applauded and savored."
Read more

4/5 Stars. "A playful dramedy with an upbeat viewpoint and dynamic characters, The Hot Wing King is agreeably performed by a company of tiptop actors."
Read more

"Strained relationships, personal despair and camaraderie among gay and straight black men are all dramatized in this rewarding contemporary work that has echoes of the wit and pathos of Mart Crowley's 'The Boys in the Band.'"
Read more

"Like a good hot wing, the play ends up having not just fire, but remarkable depth and flavor, all of which is brought out to perfection by an incredibly talented cast under Steve H. Broadnax III's assured direction."
Read more

Score: 95% "Katori Hall loves people. She loves to hear what they have to say. And these fine gentlemen ALL have a lot to say in 'The Hot Wing King.' Hall says,'If I know where a character sits in the house then I can figure out who they are.' Lucky for us there are plenty of seats in this house."
Read more