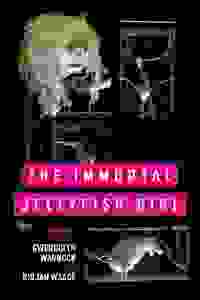 When Earth's population faces extinction in the distant future, an Immortal being finds hope.

A coming-of-age tale meets a dystopian tragedy, The Immortal Jellyfish Girl flies through universes, unbound by time, gravity, or biology. In the year 2555, large portions of the earth’s surface are dubbed dead zones and the end of humanity has started. But even in this time of loneliness and obliteration, there is still hope.

Comedic, zany, and virtuosic, The Immortal Jellyfish Girl guides audiences on an unpredictable journey through a post-apocalyptic tomorrow.

See it if If you like puppetry, comedy to resonate for serious subjects. Good direction and excellent puppetry.

Don't see it if If you need a show that brings finality. A non confusing, laid out complete written play.

See it if You like science fiction and shows that are a bit quirky, out of the box presentation wise. This is beautiful extraordinary storytelling.

Don't see it if You can’t be a little patient to let the full premise/experience of this show bloom. It takes a minute to grasp what they’re saying/doing.

Don't see it if You want a musical and not for kids.

See it if An interesting & very creative story surrounding puppetry & protecting the earth.

Don't see it if If you do not like puppetry, then skip this one.

See it if prefer the possibilities of puppetry & imagination, out of mainstream work is 4 U, like humor with your apocalyptic messaging

Don't see it if small scale is not for U, imagination is not 4 U, sci-fi give U the creeps, humor is not of interest 2 U

See it if you are interested apocalyptic plays steeped in " progressivism".

Don't see it if the fact that progressivism can never escape from its fundamentalist, Christian roots makes a play difficult to watch Read more

See it if you enjoy physical theater and terrific puppets.

Don't see it if you don't like science fiction and prefer human actors to puppets.

See it if you like puppets in a very avant-garde fanciful and creative story that is both intriguing and confusing. I enjoyed it, but I have questions

Don't see it if you need to fully understand what's going on to enjoy fine puppetry done by an expert team.

"It's not just that the story is set in a poetically rendered 2555, but that Waage and Warnock, who also directed, blithely ignored the memo about coddling young audiences: Their show, for viewers age 10 and up, does not shy from the violence and death intertwined with life"
Read more

“This is perhaps the goriest, most violent show currently playing off-Broadway. It's really not a children's show...’The Immortal Jellyfish Girl’ is here to remind us that nothing is forever, and none of us will likely be around to witness what comes next.”
Read more

“ 'The Immortal Jellyfish Girl,' running 80 minutes, is an exceptionally theatrical piece of puppetry, and everyone involved in the production should be credited for this grand collaborative effort...It is a stunningly original theatrical work.”
Read more