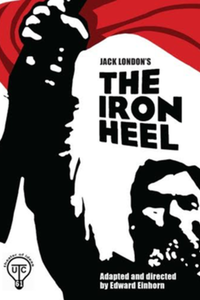 Written as political propaganda, 'The Iron Heel' tells the story of an election between a socialist revolutionary and an entrenched oligarch. The oligarch prevails, turning America fascist, and inspiring the Marxist revolution. Though it's set in the early- to mid-20th century, its themes nonetheless have obvious relevance during our current election season. This is a deliberately low-tech production, a gathering that can travel to multiple venues, public and private. Reflecting socialist philosophy, all performances are either free or pay what you can. Most performances take place at Brooklyn's South Oxford Space, however, check the show's official website for a complete list of venues.

See it if history and political polemic interest you. Based on a Jack London novel, amazing to see all he predicted about events in the 20th century

See it if You're into adaptation of political stories; also of plays with music and interactive plays (they give you the music to sing along).

Don't see it if Political Theatre isn't your thing. Or you aren't a fan of singing along with the characters. Also it's a little long and draggy at points.

See it if You're a fan of Historically (somewhat accurate) Dramas (with interludes of singing).

Don't see it if You like your theatre-going experience to be light & airy, with memorable tunes you walk away with.

See it if Cc

Don't see it if Cc

“'The Iron Heel' is burdened by dense, interminable political arguments. But that did not deter Einhorn, who adapted that leaden tome into a flawed but refreshingly unironic play...Despite its dry-looking subject, the show has an endearingly loose do-it-yourself feel...It often gets bogged down in rhetoric, especially toward the end. But it serves up food for thought with an appealing heart-on-sleeve warmth. You may well find yourself humming some of those tunes on the way out.”
Read more

"Thoughtful and approachable...Tends to lose itself in dense political rhetoric...'The Iron Heel,' though imperfect, provides a solid introduction to Jack London and his work in a time wrought with doubts about the current economic and political landscape across the globe. Einhorn’s adaptation is a testament to the idea that, sometimes, the best way to understand the past is the best way to understand the present."
Read more

"The adept theatrical version reflects the spirit of socialism–the show is free or 'pay what you can'...The show winds up an intellectually stimulating oddity rather than an emotionally stirring manifesto...As with past work, Einhorn proves again a master (but a benevolent one) in turning intellectual matters into engaging stage shows."
Read more

“This well-acted, cleverly executed production is a mind-bending tour de force of ideas, as only Einhorn can deliver, with darkly twisting humor and swaths of realism thrown in to perplex...It is a must-see if you enjoy flirting with a confluence of ideas humorously cast in an absurdist framework, and if you have fun being ejected from your philosophical and political comfort zones.”
Read more

“This would be a rather dry piece if it were not for the parallels between London’s time and ours. The struggles are a bit different, but the Jack London predicted the rise of the 1%...A fascinating story–not always captivating, but always interesting. And I was impressed by how moved much of the audience was–old lefties and younger millennials finding a common bond in a story and songs over 100 years old. It is a fun night.”
Read more

"In Edward Einhorn’s briskly-paced and endearing stage adaptation, the spine of the story remains, while much of the soapboxing has been trimmed...A rousing tale of rigged elections, false identities, prison escapes, bombings, romantic interludes, songs of solidarity, and scenes of terrifying carnage...Despite the naiveté of its source material, 'The Iron Heel' does seem to have a relevant message: As in London’s time, the American atmosphere is abuzz with the need for change."
Read more

“While telling their story, the players pause occasionally for a labor-anthem sing-along or to explain obsolete concepts. This device also allows Einhorn to insert some ambivalence about London's blithe embrace of violence...The script's reliance on hectoring speeches, manifesto-thin characterization, and narration in lieu of rousing action ultimately make for an inert production. As with London's book, it demonstrates how something can be red and colorless at the same time.”
Read more

"This production recalls...Mac Rogers’ ‘Universal Robots’ in giving an eerily artifactualized sense of existence; remote pasts reinhabited in distant futures, with we in the middle feeling like we’ve seen a ghost of ourselves…Einhorn leaves open questions that are settled in the novel to keep us thinking. And feeling...Amidst a cast of characters whose theories make the world turn in one direction or another, this is perhaps Einhorn’s most emotionally immediate work."
Read more