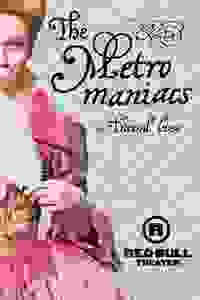 The Metromaniacs NYC Reviews and Tickets

Scheming servants, verbal acrobatics, and mistaken identities launch a breathless series of twists and turns in this breezy "transladaptation” of a French farce by David Ives ('The Liar,' 'Venus in Fur').

It’s springtime in Paris, 1738. Metromania, the poetry craze, is all the rage. Damis, a young, would-be poet with a serious case of verse-mania falls for a mysterious poetess from Breton, Meriadec de Peaudoncqville (say it). She turns out to be none other than a wealthy gentleman (yes, that’s right) with a touch of the mania himself—looking to unload his sexy but dimwitted daughter—who also just happens to be cuckoo for couplets.

Don't see it if you can't concentrate. There's a lot of plot twisting and one has to keep up. The language is easy, not overly elaborate. Read more

See it if You enjoy fun farcical shows with great comedic performances.

See it if you like having fun. The show is a complete romp. I am still giggling days later.

See it if you like witty, smart dialogue, mistaken identities, judgmental fathers, all the tropes of French farce, actors having fun,all in verse

Don't see it if you don't like plays entirely in verse, not a fan of verbal-style farce, don't like contemporary takes on old plays or convoluted plots Read more

See it if you like David Ives & to see how he revives an obscure French play, in his inimitable way. [With bon mots, farce & wit, Red Bull has a hit!]

Don't see it if Ives' clever, well polished gem turns out to be be a rhinestone Not without its charms but highly superficial fare

Don't see it if Plot sacrificed at forced rhyming structure. No reason for break in 1:45mn, save for the pun.

See it if you love clever farces, well acted and VERY well written.This show is delightful and well worth seeing. Ives is a genius!

Don't see it if you require a play that is linear and easy to follow.It is a farce so it goes all over the place but you'll love the ride.

"A play that squeezes contemporary English into pentameter couplets — and a story that doesn’t matter...Since all the characters speak in essentially the same form, there is no variation or, indeed, verbal distinctiveness. That leaves the cast, which is uniformly good, to build characters on top of the verse, instead of within it where characterization belongs. The result is rickety...Only in the second act...do the couplets begin to give birth to satisfying story."
Read more

"Ives has wound up with a middling piece that can’t trigger his gift for well-machined mayhem...Ives’s cleverness is indisputable, and he excels at a rare sort of verbal glitter. Michael Kahn’s production is physically exquisite...For farce to work, we need to sense the abyss underneath the hero’s pin-wheeling feet...Without desperation, there’s no exhilaration. And so here, on the fourth pour, Ives’s particular brand of champagne finally goes flat."
Read more

"Undoubtedly, many audience members will thrill at Ives's virtuosic wordplay...I chuckled too, but unmoored from real stakes, I found my mind floating out to sea. This is despite a zippy production by director Michael Kahn and delightfully physical performances from the cast. Everyone delivers the verse with crisp precision, so all the jokes land...It's all perfectly digestible, but tiresome on the taste buds...Ives wanted to create a fluffy gossamer entertainment, and he did."
Read more

"Thanks to Kahn's tight direction and a cast that knows how to keep the ball in the air, a steady procession of laughs is guaranteed...I have one reservation about 'The Metromaniacs,' and it's a fairly significant one: The sheer number of gags, absent the tiniest hint of emotional involvement, ultimately becomes a bit wearing...Then again, the current scene doesn't offer so many great comedies that we can afford to overlook 'The Metromaniacs,' and the cast is a thoroughgoing pleasure."
Read more

"'The Metromaniacs' is screwball at its best, with the entire ensemble working their butts off to deliver Ives' complex, delicious rhymes, and playing off of each other's energy...But the show, in its own way, is also quite insightful about the nature of addiction, as it humorously shows the lengths these characters will go to, in order to satiate their need for verse. It never gets dark, no, but it's been haunting me for days after seeing it."
Read more

"A head-spinning plot...This is French farce featuring a satirical target not necessarily in synch with today’s prosaic concerns...Those buckshot couplets that had me tired out by the end of the short first act...Given the baroque material, there may be no other way to go about acting in the dashed thing. And they’re all braced for the challenge. One wily Piron turn of events occurs at the very end...Ticket buyers can and do leave laughing."
Read more

"What gives this extremely silly business its babbling charm is Ives’ inventive wordplay...Kahn's staging here could be more lightly handled. The actors deliver broad performances that look forced. Between the propulsive couplets, the mostly unvaried rhythm of the brisk pacing, and the superficial acting, the show eventually becomes relentless...A comedy as quick, lively, and verbal as 'The Metromaniacs' needs extra room to breathe."
Read more

“To add that ‘The Metromaniacs’ also contains a play within the play, in which all of the characters are apparently playing themselves, might begin to suggest how confusing it all becomes, especially since they all enter and exit with a rapidity as if there were indeed a fire in the house–meaning Francalou's no less than The Duke Theater on 42nd Street.”
Read more