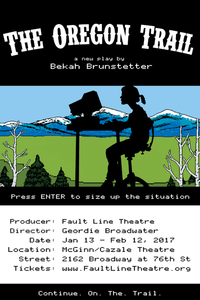 View in admin
The Oregon Trail
NYC: Upper W Side
74
Score it Scored!

Fault Line Theatre presents a play that contrasts the trials of an adolescent girl growing up in the late '90s with her 19th-century video game counterpart.

It’s 1997. Alone in her computer lab, 13-year-old Jane escapes from the awkward throes of puberty by virtually jumping in a covered wagon headed west on "The Oregon Trail." Under the guidance of the all-powerful Voice of the Game, we watch "Then Jane" navigate the perils of 1850s frontier life, while '90s Jane navigates the different but all-too-real dangers of high school, college, and, eventually, adulthood. Jane soon finds herself in her 20s, unemployed and battling an undefinable lifelong sadness she cannot name, even as “Then Jane” continues to face the tribulations of the trail. With nearly two centuries between them, both Janes face hardships that seem impossible to overcome—until they find one another.

See it if It was a rough show to get through . I was itching to leave after 15 minutes. Bad script. Poor staging .... I wanted to root for it, but ...

Don't see it if I would not recommend it.

See it if you're a Bekah Brubaker fan, enjoy stories of women empowering themselves and finding their purpose, like plays set in 2 time periods

Don't see it if you expect realism and are not a fan of whimsy, unwilling to look beneath a character's outward actions, not a fan of subtle, quirky comedy

Don't see it if Contemporary scenes never felt as potent as 1850s ones & lacked a needed punch Difficult to empathize with Vaynberg's malaise (acting?)

See it if it has closed but partner says 85. I found it too ambitious and fantasy like.

See it if You are looking to see a poorly written badly acted drama to compare with the many worthwhile ones being performed now in NY !

Don't see it if You care about plots that make sense. You are wanting to see new terrific young actors deal with a challenging script. Script/acting bad !

Don't see it if depression/ennui as subject matter is not your cup of tea, suspension of disbelief with computer gaming as a conduit 2 other worlds Read more

See it if You are a fan of old videos games. Are patient with stories that unfold s-l-o-w-l-y.

Don't see it if You are an impatient audience member. Read more

See it if You want to laugh. You want to go on a journey with a young lady as she is coming of age and the the trials that life brings.

Don't see it if You are not interested in the journey of life that a young lady experiences. You don't want to laugh. You don't like non linear plays Read more

“A sour, low-stakes comedy…Beyond scratching a specific nostalgic itch, the play offers few rewards…Jane's not really functioning, yet throughout the show's 90 minutes of self-destruction and indulgent passivity, neither she nor her doctor sister brings up therapy or medication. Whether Brunstetter is making a point about generational malaise or actual illness, she's spent too little time speculating on a cure.”
Read more

"The subject is heady, and for a good chunk of the play, 'The Oregon Trail' delivers both a nuanced portrait of depression and a gently humanized vision of a game where, for the most part, the main goal was to kill weary travelers from typhoid...Yet 'The Oregon Trail' also never feels as fully fleshed out as it should be, with the sequences in the 1800s particularly shortchanged toward the end. Director Geordie Broadwater has a strong vision, though."
Read more

"Depression is not an easy state to dramatize, and, in any case, Jane comes off as a pill—whiny, narcissistic, a perpetual victim...The fact remains that Jane's depression is presented without any insight and we are led to believe that her sufferings are equal to those of Then Jane, a notion that would be laughable if it weren't so grating...Brunstetter is a talent to watch, but this 'Oregon Trail,' I'm afraid, leads to a dramatic dead end."
Read more

"There's much that's good about 'The Oregon Trail.' Broadwater's staging is incisive, funny, and quick-moving. The physical production...is spot-on for both eras. And with the exception of Arturo...the acting is well pitched with the writing. Still, Brunstetter's writing and conceptualization could be sharper, and, as witty as the references to it are, the game is more of a diversionary tactic than a fully integrated storytelling mechanism."
Read more

"Brunstetter explores how depression is carried in these women’s bodies and how they articulate that sorrow in their respective eras. Their shared despondence resonates at times, though in this production, the 1800’s segments never feel as sharply drawn as the contemporary scenes...When the play clicks it's engaging, but that fascination can ebb and flow, and the themes tend to circle the wagon without gaining depth. But there is a sincerity and warmth to these young women."
Read more