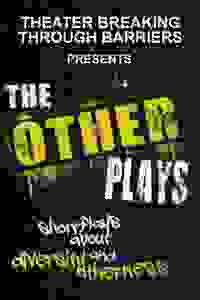 View in admin
The Other Plays: Short Plays About Diversity and Otherness
NYC: Midtown W
75
Score it Scored!

The Other Plays: Short Plays About Diversity and Otherness NYC Reviews and Tickets

Theater Breaking Through Barriers presents an evening of short plays exploring the themes of race, religion, sexual identity, and social otherness. Playwrights include Neil LaBute and Bekah Brunstetter ('This is Us').

As a band of artists who live and represent disability—the only Otherness that knows no race, religion, gender, age, country, or political affiliation—TBTB's goal is to unite all Others on a common ground to learn, share, and grow together as one.

In Bekah Brunstetter's 'GIRL #2' an audition raises issues of diversity in casting for a group of actresses. Directed by Gwynn MacDonald.

When a black girl asks her white co-worker to go with her to an office party, the answer is anything but black and white in Neil LaBute's 'No Hard Feelings.' Directed by David Rosar Stearns.

In 'A Difference of Beauty' by Tatiana G. Rivera, a compliment from a stranger elicits an unusual reaction. Directed by Pamela Sabaugh.

Set in a bombed out house in Aleppo, Lameece Issaq's 'Noor and Ahmad Go to Hogwarts' shows two Muslim kids trying to escape the horrors of war through the world of 'Harry Potter.' Directed by Ann Marie Morelli.

See it if you don't mind sitting through some less-than-engaging plays to see some very good ones. (I thought the last piece was exceptionally good.)

Don't see it if you're looking for a deeper exploration of otherness. Many of these plays felt very superficial. (Granted, they are short, but even so...)

See it if you enjoy seeing something about and underdog

Don't see it if you are looking for a play. this is not a "play" its 5 shot plays, a song and 3 monologues. The acting is very unbalanced Read more

See it if you like interesting, short plays about important topics.

Don't see it if you are not concerned about people with disabilities and what they have to overcome.

See it if A disparate group of short plays, at times little more than extended scenes, fits your attention span. LaBute piece & Barnes solo stand out

See it if You like vignettes; there's about 8 (5 short plays & 3 solo pieces). They vary in degree, but, I'm biased because I love this theatre's

Don't see it if Stance on diversity and otherness, so I'll never really leave a negative review. It's nice to see actors, with impairments, be showcased.

See it if you endure one act potluck format. LaBute, Brunstetter maintain their excellence. Allen and Issaq earn their keep. Barnes best of monologues

Don't see it if You hate inconsistency. Rivera's play interminable and excruciating. Drabicki and Haddad whiff in self written pity parties. Read more

See it if you like plays about POC, LGBTQ, disability, & that examine many different issues from diverse voices. It's a series of short plays.

See it if Some are winners, but seems latter ones were tagged on-not strong/verge on silly/preposterous. Some v good acting/charm, but is a mixed bag.

Don't see it if You'd get agrivated by being forced to empathize w/those who are disabled in some way, & to look at what constitutes disability-woman/black?

"The evening is well curated, though a few plays stick out because of their clunkiness and underdeveloped scripts. One in particular was a little bit of a train wreck, which I’ll attribute to nerves. But such problems are easily forgotten as soon as the next piece begins...Overall, this evening of theater is a moment to reevaluate and retire tropes of people living with disabilities as anything but independent and full of verve."
Read more

"As often happens with an anthology performance, some of the vignettes are brought to life more capably than others. One technical flaw that seems to connect all of the individual pieces is a too-long fade to black, leaving the audience consistently unsure as to whether a piece is truly over. Overall, however, this production is touching, humane, and attainably confrontational. It is well worth a visit."
Read more

"The caliber of the evening continued improving and morphing into something quite special...It was a collection of shorts that is very much speaking to the call of right now. As we’re struggling to define ourselves and we worriedly fear losing funding or being allowed to happily celebrate our differences, 'The Other Plays' grandly lets their voices be heard – and what a fun, wonderful voice it is."
Read more