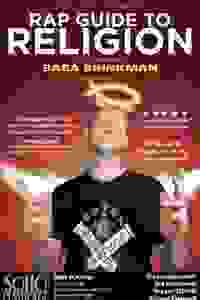 'Rap Guide to Religion' traces the roots of faith from tribal animism to radical Islam to Justin Bieber thanking god at the MTV Teen Choice Awards.

The world is full of religions, thousands of them. New religions are formed every day, while others are forgotten. How are we to make sense of it all? Rapper and playwright Baba Brinkman reveals the hidden logic . The bottom line: religion evolves. As an atheist himself, Baba sees no truth in the supernatural claims of religion, so instead he looks for the evolutionary benefits of belief. Religion and evolution are supposed to be mortal enemies, right? But they become surprisingly compatible once you understand religion as a natural product of evolution. Just like rap concerts, religions are designed to “move the crowd” by any means necessary – and with the help of some famous rappers, Baba Brinkman is determined to find out why.

See it if you enjoy Baba's brilliant way of tackling a subject, with humor, intelligence and rap, this time with impressive video projections.

Don't see it if you are not open to continuing development of scientific facts replacing religious beliefs or do not like one person shows mostly rapped.

See it if you'd like a unique, engaging, well-researched & accessible lesson in the history of faith from the POV of a white Canadian atheist rapper.

Don't see it if ur a strict creationist, uncurious in scientific exploration of the origins & traditions of world religions (& the connection to hip-hop). Read more

See it if Rapping with science and religious belief. Not Heavy, its fun

Don't see it if If you dislike rap or want heavy, serious show.

See it if Easy going Canadian merges tribalism, religiousity, and hip-hop into one non-threatening scripted freestyle lane. Kicks around some rappin'.

Don't see it if Zoroastrianism not sufficently encompassed before 1100 BCE...Just kidding!Tribalism,religiousity & hip-hop merged into 1 lane not yer thing? Read more

See it if You want a history of religion & how it's evolved over the ages. You want a mix of learning & entertainment. You like intimate staging.

Don't see it if You're steadfast in your religious beliefs & don't want to be challenged. You want a better Baba show:this felt under-rehearsed & workshop-y

See it if You enjoy using the rap format to convey messages!

See it if You want to see a rap about religion. Very intelligent guy. Great song writing and ideas

Don't see it if You do not like one man shows

Don't see it if the idea of rap repulses you