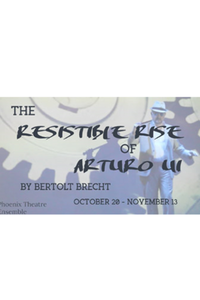 It's '30s Chicago, where a crazy but charismatic gangster named Arturo Ui is hellbent on gaining power at all costs. Brecht's farce ultimately turns frighteningly relevant as the playwright uses a wide range of parody and pastiche, from Capone to Shakespeare’s 'Richard III' to Goethe’s 'Faust.' Directed by Obie winner Kevin Confoy.

See it if Just an average theatre guy from the east village here- pleasantly surprised by this production. Great if you like RADIO shows & gangsters

Don't see it if want broadway like plot and singing, this is much more original.

See it if You're interested in seeing interpretations of Brecht. A few *good* performances - but that was about it. The live scoring was great!

Don't see it if You want to see (mostly) bad acting in an interpretation of Brecht.

See it if you love provocative history plays

Don't see it if you expect clear drama

"At first, it's moderately amusing making connections between Brecht's characters and plot points and their real-life counterparts, but, all too soon, his tale of corruption...pales before the real story that has been seared into our collective consciousness. We're one step ahead of Brecht, tapping our feet, eager to get to the next development while the author slowly, deliberately makes his points amid some rather leaden satire...Smith has his moments...A generally fine supporting cast."
Read more

"The trenchant tale of an underestimated two-bit crook who becomes one of the world's most notorious criminals is brought vividly to life...The best moments of the production occur when things turn surrealistic...Mostly it all works, although there are a couple of distractions. One of these is a framing device that offers up the play as if it were a radio drama...This comes off as more of a gimmick than a means of shedding light on things."
Read more

"A misguided concept, muddled execution and a weak central performance make this production a tedious experience...The play is referred to as a spectacle several times but the small stage is cluttered with tables, desks, the organ and the microphones. Director Kevin Confoy hasn’t worked out a satisfactory arrangement between the set and the ten actors, so there is often a cramped visual quality that is far from a spectacle."
Read more

"Confoy has staged this classic piece with great attention to detail, not only in production, but in the construction of character. He is careful to keep the beat of Brechtian tone and style—naturalism is thrown out the window...An incredibly satisfying examination at the stealthy ways that evil takes power...The performances are outstanding, with only a few moments of unconscious naturalistic overacting."
Read more

“Thanks to resourceful direction and design, Brecht's rowdy, ambitious work is an interesting if uneasy fit for such a snug venue. The evening's great surprise is that, by the end of the show, this little auditorium's lack of elbow room proves crucial for conveying the most uncomfortable themes of the text…Confoy has cast this production with 10 actors whose idiosyncratic faces fit the cartoon quality of the play.”
Read more

"An interesting rendition of Brecht told within the structure of a radio drama, which has moments of humor but sometimes gets in the way of the presentation’s smooth conveyance...At times the cast under Confoy’s direction is darkly frightening and outright funny, especially when the ensemble works artfully, with balance and precision. Sometimes the farce is pushed and the production somewhat uneven...The Phoenix Theatre Ensemble has made a noble attempt with this production."
Read more

"Smith brought new insight into the character and developed a new dimension for the role that emphasized the criminal insanity...I admire the choice for its boldness, its execution, and its truth...This show is not a rollicking good time with loads of laughs, nor is it a charming rom-com. It was never meant to be anything more than a fable and a warning about political compromise, principle, and the trite but true observation that evil triumphs when good people do nothing."
Read more

"A piercing look at the rise of a thug...As beautifully directed by Kevin Confoy and acted by Craig Smith, Ui is rather a schlemiel, who through happenstance...is able to win control over the Chicago vegetable trade...Brecht thus counterpoints the comedic story of Ui with the historical rise of Hitler...Although there are scenes that hit the mark, the play is far too difficult to follow...Good editing to simplify but also to shorten the play would go a long way in this case."
Read more