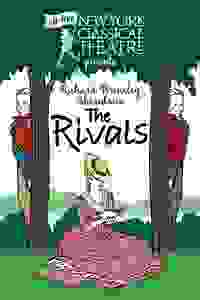 View in admin
The Rivals
NYC: Upper E Side
84
Score it Scored!

The Rivals NYC Reviews and Tickets

Lydia Languish can imagine nothing more romantic than eloping with the impoverished Captain Beverly. Little does she know that Beverly is really Jack Absolute, a wealthy aristocrat who fears the truth of his identity isn't nearly romantic enough for Miss Languish's taste. How will he win her from himself? The audience follows the actors from place to place as the play moves from scene to scene. The show covers approximately three city blocks over two hours, so wear comfy shoes and clothes that can get dirty. 'The Rivals' plays Central Park (June 6- July 2), Nelson A. Rockefeller Park (July 5 and July 7-9), and Carl Schurz Park (July 12-16).

See it if you want to see EXCELLENT acting, in an open area of central park

Don't see it if sitting on the grass and running around from place to place isn't for you. Location changes roughly every 20 minutes

See it if you like outdoor theater & an fun farce

See it if You have liked other New York Classical Theatre productions in the past and don't mind a bit of a cliched storyline on "mistaken" identity.

Don't see it if You have trouble hearing, don't like sitting outside or don't enjoy having park goers wonder what is going on. Read more

See it if Quite nice given that it's free, and you really cannot beat the settings. Other than that, the script's a tad trifling and acting is varied.

Don't see it if You expect a serious drama or object to extraneous noises. Read more

See it if Also known as Shakespeare-on-the-run, you move locations as the scenes change. Professional actors, acting outdoors for great fun!!

Don't see it if You want to just sit and be lulled or cannot easily walk around in a park.

See it if Like walking outside and want fresh air. Want to see an old, old play that isn't Shakespeare.

Don't see it if Don't like the heat, or walking, or not having real seats. Don't like old, old plays that aren't Shakespeare. Can't hear well.

See it if you want to see great theater outdoors. The show is funny and well-acted, and because the audience moves, it's super engaging.

Don't see it if You're looking for serious drama, or if sitting on the ground and having to change places/wander around central park isn't appealing to you.

Don't see it if You don't like period pieces

"Two thumbs way up, then, for the scenic designers Calvert Vaux and Frederick Law Olmsted. With a cast of 10 directed by Stephen Burdman, the show itself is less successful. Slimmed down for speed, the script sacrifices depth and clarity and with them some comedy...The performance over all lacks vitality, with the sputtering, brooding Faulkland the only character who seems flesh and blood...Others have their moments, but the moments don’t cohere."
Read more

“Easy to follow, regardless of the classical language...The leisure of the audience reflects the exaggerated idleness on stage…Bold intrigue, disguise and duplicity are colorfully wed in this positively delicious comedy…The show feels intimate, despite the presentational manner in which it begins...The bucolic setting, the contemporary spirit of the story, and the friendly energetic actors make for a felicitous gathering.”
Read more