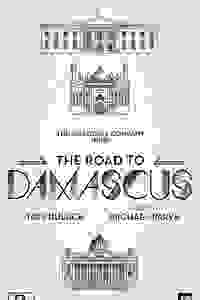 View in admin
The Road to Damascus
NYC: Midtown E
74
Score it Scored!

The Road to Damascus NYC Reviews and Tickets

The Directors Company presents this new play about civil war in Syria and America's response after a bomb explodes in Manhattan.

America is under threat as full-scale civil war rages in Syria. A bomb has exploded in Manhattan and all roads lead to Damascus. The President must act. A peace-seeking, African Pope is elected to the Vatican and an Evangelical third-party President is in power in the US. With nuclear war looming, will the new Pope intervene directly in American foreign policy in Syria or will he accede to the demands of Washington? Riddled with international intrigue, Tom Dulack's prescient play imagines a world ripped from today's headlines.

See it if you like political thrillers. This set-in-the-future international crisis has plenty of schemers. Lots of explication thru phones and video.

Don't see it if you'd prefer real events of political intrigue to be depicted (like me!) There are lessons from history which deserve to be revealed. Read more

See it if You are religious.

Don't see it if You are not religious