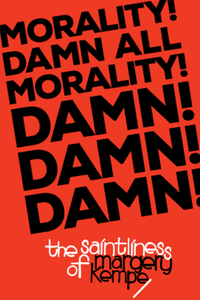 The Saintliness of Margery Kempe NYC Reviews and Tickets

Austin Pendleton directs a new revival of this comic drama from the 50s, which follows the true-life misadventures of the famed English woman of the 14th Century.

Margery Kempe thinks she is a remarkable woman. The rest of the world doesn't quite see it that way. Kempe begins her career by throwing her lot in with the Devil and buying a brewery. When this doesn’t work out, she decides to become a saint instead, although she has none of the qualifications for the job. Based on 'The Book of Margery Kempe,' the first autobiography written in English.

See it if you're a Nichols fan; she stands out. O'Connell is a worthy counterpart. Ensemble isn't great (director's fault?) TSMK's plot fascinates.

Don't see it if you're easily bored; every scene is too long. Humor unevenly elicits laughs. Key messages get buried. Not a waste, but misses the mark. Read more

See it if You don’t mind seeing a show that’s got some pretty good moments in it but gets bogged down with some pretty uneven acting.

Don't see it if You want a great show with good acting, sets and costumes. It all felt pretty amateurish to me.

See it if You want a comedy that is not that funny.first act all over, second has better energy but still falls short.

Don't see it if If you want a more serious play. If you want something that is consistant.

See it if you want a night of escape with a great troupe of actors bringing about hilarity with a medieval story.

Don't see it if if you are impatient - the first act dragged a little at times, but the production was redeemed in the second act.

Don't see it if you expect to laugh [I'm not really sure this is even a comedy], to be moved, or to be impressed by Pendleton's usually reliable direction.

Don't see it if you want to see a story that you can believe where a woman leaves her 14 (reduced to less than half) children behind to search for ??????

63
Humorous tale of woman during the middle ages who wants to be a saint; but playwright is no chaucer

See it if unusual picaresque tale set in middle ages about a woman who asserts herself, less saint, more pain in the a**; breezy humor; solid cast

See it if This comedy has some funny parts. It's about a woman who wants more out of life during the time when women didn't have choices.

Don't see it if If you just like musicals.

"The great Frances Sternhagen played Margery in the original Off Broadway production, in 1959, opposite Gene Hackman...The delightful news about Austin Pendleton’s uneven revival, is that the standard for those roles hasn’t slipped a millimeter...Nichols and O’Connell are delicious to watch...The play is most fun when it moves at high speed, and a languor overcomes the slack first act...Not all of the casting is as spot-on as the leads."
Read more

"Performance-wise, it’s all over the place...Nearly half of Wulp’s comedy is repetitive and, in this iteration, unfunny. After a long stretch of dullness, the play finds a spark of energy in its second act...There’s relevance here—something about our seemingly endless appetite for attention, or about the performative nature of holiness itself. But the play needs more beauty, more speed, more strangeness, more noise."
Read more

"Something much duller than it has any right to be...With no rhyme or reason to Margery's victories, defeats, and internalized lessons, these ebbs and flows feel as arbitrary as her whims. Director Austin Pendleton has set out to dust off this 60-year-old play. Dust, however, isn't so much the problem as is 60-year-old clutter that this production dances around in lieu of doing a thorough purge...Our title character feels similarly stranded in a narrative that renders her less than the sum of her parts."
Read more

"One can understand the attraction...Ultimately, however, Wulp's play is disappointing. The play aims for big laughs, but not all of the ludicrousness lands...Still, Pendleton has drawn fine performances from his nine-person ensemble...The production benefits from a spare design, allowing the focus to remain on the strong performances...Despite its flaws, 'Margery Kempe' is a reminder that a woman does not have to be a saint nor a sinner to change the world."
Read more

"In one of my first jotted notes, I wrote, 'Is this a comedy?' I never laughed, but at the performance I attended there were a few titters. So here’s the benefit of the doubt: Okay, 'The Saintliness of Margery Kempe' is a comedy, but a bad one...On how to shake out this dust-ridden screed, director Pendleton is at a complete loss...The pseudo-poetic lines the nine actors are handed—all but Nichols doubling, tripling, quintupling—prove insurmountable."
Read more

"Neither a Monty Python-esque spoof of a darker age nor an amusing character study of an obstreperous individual. It is merely a mildly facetious comedy about a self-centered woman whose personal dramas endear her to no one other than a long-suffering spouse. Overlong at two acts and nearly two hours, the spotty play benefits from the sort of good, solid acting that typically characterizes so many of Pendleton’s productions."
Read more

"The cast list in the program reads more like a medieval phone-directory--even if there were no phones in the Middle Ages--than it does a dramatis personae. And then there's what happens to the characters during the course of the play which is as hard to say as it is to remember all of their names, let alone pronounce them."
Read more

"The thematic relevance of a forgotten play doesn't automatically translate into dramatic effectiveness…Much of interest but also something of a lump…Working under Pendleton's not particularly inventive direction…Nichols makes a dynamic and forceful Margery, embodying the comical and serious sides of her kooky determination…The arch manner in which Margery's experiences are presented, and the generally tepid quality of the humor, would try the patience of a saint."
Read more