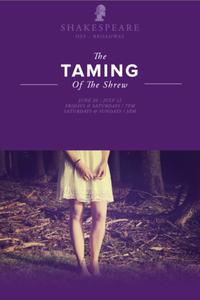 View in admin
The Taming of the Shrew (THTR PRJCT)
NYC: Greenwich V
79
Score it Scored!

The Taming of the Shrew (THTR PRJCT) NYC Reviews and Tickets

Shakespeare's classic comedy about of the most unlikely romantic couples in all of literature produced by Shakespeare Off-Broadway.

The hilarity begins when an Italian merchant decrees that the younger of his two daughters cannot be wed before her strong-willed, less popular and less beautiful sister is married. The problem is that no man in Padua is willing to marry Katherine the shrew. That is, until the fortune-hunting Petruchio, newly arrived from Verona, agrees to woo and wed Katherine (for a sizable dowry, of course). What ensues is a "battle of the sexes" story that set the standard for nearly all to follow.

See it if all female casts are alluring answer to some of Shakespeare's problems with this play.

Don't see it if you don't want to wait on interminable lines for a free ticket.

See it if You appreciate new interpretations of a classic, enjoy seeing excellent up-coming talent, like the small theatre scene.

Don't see it if You expect the literal interpretation, perfect production values.

See it if Not the best I've seen but entertaining.

Don't see it if You are looking for something wildly funny.

Don't see it if too much rain

"This 'Taming of the Shrew,' though uneven in its performances, is a surprisingly adept interpretation of a typically problematic piece...This production navigates the piece’s inherent sexism quite well, presenting Kate and Petruchio as each other’s equals without reimagining or heavily adapting the text...This 'Shrew' is actually an admirable production, which entertains without requiring the audience to accept or overlook the sexism."
Read more