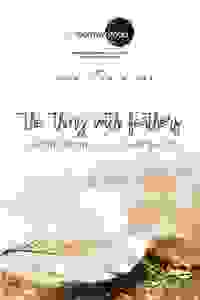 The Thing With Feathers NYC Reviews and Tickets

The Barrow Group's world premiere drama tells the tale of an underage teenager who is seduced by an older man on the internet. Things however, may not be as straightforward as they seem.

'The Thing With Feathers' feels almost like a thriller as it unfolds what is ultimately a story of forgiveness. Featuring a cast of four, the new work promises to keep audiences on their toes until its surprising end.

See it if Within the issue of underage sexual connections, ​this is treated in an intelligent and very surprising way. Great plot twists.

Don't see it if You are sensitive to issues of underage sexual connections. Read more

Don't see it if You dislike intense or unsettling shows. The story is uncomfortable but shines a light on a real life issues that are relevant today. Read more

"Niziak, who plays Anna, is also 16, and her command of the role is extraordinary—because she is so young, yes, but mainly because she is so entirely at home in her character’s skin...The play fatally falls apart at the end, but Organ keeps us entertained for a good long while before that...The later sections of the play feel contrived in a way that nothing that comes before does; he is determined to let a concept rule the action. The characters, sprung to life, have long since taken over."
Read more

"Onstage Lifetime movie...While the production by director Seth Barrish unfolds with the kind of gasp-inducing, popcorn-shoveling relish that we usually associate with televised guilty pleasures, this play still has some timely things to add to this strange moment in our sexual culture...The play develops at an exceedingly slow boil in the first half as we watch these bland people interact...Whatever the flaws of the production, the subject matter of the play is too interesting to resist."
Read more

"Organ ensnares his characters in a ticking-bomb situation that will leave you in a constant state of tense expectation...Under Barrish's tautly controlled direction, this is a crackerjack psychological thriller, a series of muffled shocks hidden under the surface of everyday life, with each character taking a turn as the aggressor...Organ clearly knows how to sneak up on an audience, trapping us as easily as he entangles his characters in crimes past and present."
Read more

"As social commentary and cultural exposé, 'The Thing with Feathers' is timely and important...It succeeds as an old-style stage thriller and psychological melodrama that incorporates twenty-first century anxieties...In general director Barrish successfully balances the play's contemporary realism and melodramatic flourishes. The play takes some time, unfortunately, to come to a boil...The ending is disappointing. The message seems tacked on and not organic to the play."
Read more

“Though there's a major surprise lurking at the top of the second act, and though it's about how sins of the past can impinge on the present, Scott Organ's ‘The Thing with Feathers’ is ultimately a play without many virtues. Early references to Emily Dickinson and poetry--the title comes from a bastardization of a Dickinson poem--fail to lift the work out of the made-for-TV movie-of-the-week sensibility that keeps bringing it down.”
Read more

"A fantastic cast navigates the script's convoluted relationships...The cast is able to pivot quickly into mixing scary with funny to keep the audience shocked with unexpected twists and turns...The bar is set high in the first act; unfortunately, once the play's secrets are revealed in the second, the surprise and delight diminishes...Despite some disappointing elements, 'Feathers' is the kind of show that can help propel the conversations we need to be having."
Read more

"The playwright Scott Organ very skillfully and incrementally introduces piece by piece of the plot and turns each bit of information on its ear as he adds the next piece. The actors are perfectly cast...The relationships created...are beautifully portrayed and so fully realized that the surprises flow inevitably...This is a very enjoyable evening dealing with unsettling issues. It demands a juicy conversation on the way home."
Read more

“A creepy pleasure…There is something a bit Hitchcock in this work. One fact slides into another until there is a very slow motion pileup on the freeway to happiness…This is one of the many delicious qualities of the writing – days later a person will still be mulling over the events to see how one led into the other…The second act does not fare as well as the first…The plot becomes predictable. Organ does, however, come close to saving it all with a bit of fancy footwork.”
Read more

“A riveting psychological melodrama, acted with total authenticity…directed with just the right tone of unsettling credibility…you'll find it in Act One…Act Two, which contains a surprising plot twist, is a little shakier…Organ is very careful to justify the twists in his plotting, even if, as usual in such plays, we need to suspend our disbelief a bit...TBG has assembled a knockout cast that has us holding our breath as every second breathes with tension.”
Read more

"One of the more interesting plays to hit this season and it is sure to stir emotions...Barrish's direction seems a little slow. At times it is hard to believe this story due to the casting and other facts that turn out to be true...Will draw you in and will make you think. The turn of events will keep you guessing as to what is really is going on, keeping your interest. Though I would like to hear more on the why's, I recommend this as a show to see."
Read more

"Organ sets up situations provoking expectations of dire/violent outcome. Tension ebbs and flows never quite dissipating...A play about expectation, power, responsibility, and consequences. Writing is completely credible until the very end...The piece offers a helluva ride. It's topical, skillfully crafted, and well produced...Barrish creates a natural atmosphere with attitude as realistic as stage business. Actors are given space to listen and react. No one overdoes it. Timing enhances."
Read more

"Even if at moments some twists are hard to swallow, director Barrish paces the piece well, with familial kitchen scenes that induce calm, and scenes of danger and outright threats that are unsettling. Still, Organ's characters are occasionally irritating...Any play that has the audience eager to express opinions about what they're seeing is well worth the watching. 'The Thing With Feathers' is such a one."
Read more

"'The Thing With Feathers' unfolds as something of a mystery...The drama illustrates how the past has a way of coming back to haunt us...Tightly directed by Seth Barrish...These actors' ensemble work makes the drama riveting...If 'The Thing With Feathers' is mostly an ensemble piece, it also gives Booth the chance to show his versatility, keeping the audience perpetually wondering what he will do next and why he will do it."
Read more