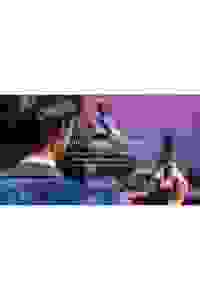 The Trial of Mrs. Surratt

“The Trial of Mrs. Surratt,” a new play with music, is an exploration of the lives of those infamously dubbed as the “Lincoln Conspirators.” More…

This play challenges audiences to examine this tale of American history from the perspective of its most misunderstood historical figures. Based on actual dinner table conversations, federal trials, and journal entries, the piece explores 1865 post-Civil War America in a way most have never imagined. All songs within the play are historic Civil War battle hymns.

See it if You’re looking for a slow musical-play that’s a bit odd.

Don't see it if You’re looking for upbeat entertainment.

Ken-G
Sacramento
65+ | Male
404 reviews
Get Alerts Alerts On Alerts Off
79
Elevated viewpoint of all characters on stage all the time, Focus shifts non-linearly from scene to scene, Fine ensemble acting, Historical base
May 16th, 2019

See it if New words to old folk songs set stage for enactment of rush to the conviction and execution of woman who boarded John Wilkes Booth.

Don't see it if You don’t like experimental theatre with a beehive of activity at all times, sometimes confusing. You want an orderly linear plot.

Don't see it if out of the way theater in arts centre and worst of all, hardly any audience. i felt so bad for the actors. so this was depressing -- so go!

See it if A historical play with music which plays with the facts with a large cast of committed performers is for you. Interesting, yet, not factual

Don't see it if Blatant disregard for transcripted history, inaccurately told would upset you.

Don't see it if Historical conspiracies don’t interest you. You want something fluffy. Non-linear storylines confuse you. 2 hour play w/o intermission

Also I was caught by surprise by this show. Everything about it was incredibly well done. The writing, acting, singing, and the incredible staging were all in perfect harmony with the story at hand and though it was a non-linear storyline it was never confusing or out of sync. The only negative thing I found was that the space is a very large cavernous room in a Cultural Center - perfect for this piece and the huge cast & intricate staging, but the acoustics are very challenging. I was sitting on the far right and when action was far left it was very difficult to understand. It didn’t spoil the experience just wished the space had better acoustics. The show was captivating from the first moment to the last and even though I knew the outcome of the story it was still suspenseful. Kudos to everyone involved for a superb production and especially to Natalie Villamonte Zito for the immersive and highly effective staging of this big cast. It goes from cacophony to harmony. Perfect storytelling.... Read more Read less

See it if You like long historical pieces, like sloths and have good hearing. You want to see an interesting subject

Don't see it if You expect a well acted play with some female exceptions. Can’t sit 2 hours. Drums drowned out sound.

15 reviews
Get Alerts Alerts On Alerts Off
89
Entertaining, Clever, Ambitious, Absorbing
May 16th, 2019

See it if You love historical drama...

Don't see it if You don’t like flash backs and historical drama...

11 reviews
Get Alerts Alerts On Alerts Off
67
Disappointing, Confusing
May 18th, 2019

See it if You are a student of the Lincoln Assasination and the prosecution of the people accused of the deed.

Don't see it if You don't enjoy that era or the music and ambience of post civil war America.

1 reviews
Get Alerts Alerts On Alerts Off
93
Ambitious, Absorbing, Relevant
May 5th, 2019

Don't see it if You don’t like fast paced theater, and unconventional staging

See it if You can appreciate aesthetic mastery in theater and great acting to boot. The show has colorful characters that never stop story telling.

Don't see it if You're confused by unconventional theater. The show moves quickly and jumps all over the timeline. The staging is exciting but overwhelming.

See it if You value aesthetic over depth. The lighting is fantastic, as is the use of negative space and shadow. The set design is very well done.

Don't see it if You are of color. This is written by white folks exclusively for white folks. They DID NOT have to use MAMMIE, but they CHOSE TO use MAMMIE.

Also Almost 100 years after Hattie McDaniel gave the segregated United States and its motion picture industry the pandering of a generation in her role as Scarlet O'Hara's "Mammie" in Gone With The Wind, the black women of the Inter-Bellum/Post-Bellum South still cannot catch a break. It is inexplicable that in 2019 New York City there exists a play where not only is the vast majority of an ensemble cast white, the only role available to an African American is that of the slave, and the character itself is the most damning stereotype that exists of black women. Why is it that every one of her lines is written for laughs? Why does she have to specifically carry a basket of fried chicken? This play is either attempting to go tit-for-tat with Gone With the Wind or even surpass it in its destruction of the humanity and sovereignty of the black body. Stop belittling the lives and history of our beautiful ancestors. In 2019, this should not be too much to ask. www.ferris.edu/jimcrow/mammie... Read more Read less

Don't see it if You don't like good theater.

1 reviews
Get Alerts Alerts On Alerts Off
98
Interesting, Great acting, Ambitious
May 17th, 2019

See it if Musicals and/or historical pieces intrigue you. This work offers some excellent moments of portraiture and multiple dimensions of action.

See it if You loved absorbing, breathtaking, alive pieces of theatre like Once and The Old Man and The Old Moon, if you like foot-stomping music.

Don't see it if You dislike period plays, plays with music, or need tons of action.

See it if you love great story telling, great music, and talented actors giving their all to a beautifully done show.

Also I loved the thought behind it all, the bare feet-resenting the diseased, scenes before & after the death of President Lincoln, & the constant loop of time. The actors are all so talented! I was sucked in for the moment I walked into the theater!... Read more Read less

Helpful?
View in admin Edit
I
Idelis
The Bronx

1 reviews
Get Alerts Alerts On Alerts Off
96
Fresh, Must see, Great staging, Absorbing, Clever
May 15th, 2019

See it if you love Works that play with time. If you like history , contemporary music , innovative staging . Exciting movements.

Don't see it if You like classic , traditional theatre, or if you’re not open to new theatre styles.

See it if You want to see a creative show. The set was perfect. The acting excellent. Music and singing was fabulous. We all enjoyed the show.

Don't see it if You don’t want to see a thought provoking and historical show.

See it if you enjoy unique stories of history, bluegrass music, and a great ensemble of actors. The actors are incredible as individuals and as a unit

Don't see it if you cannot sit still for two hours - it is one act.

“The Trial of Mrs. Surratt” hasn't been reviewed by any Critics (yet!)