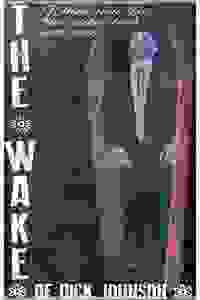 View in admin
The Wake of Dick Johnson
NYC: Queens
97
Score it Scored!

The Wake of Dick Johnson NYC Reviews and Tickets

Written, directed, and performed by Luke Walker, this multimedia solo show evokes the experience of a wake to explore the juxtapositions of life and death, good and evil, and body and spirit.

The spirit of Dick Johnson lives on after his death. At his wake, Dick is able to reanimate his corpse, grab a bottle of his beloved booze, and enlighten attendees about the spirit world. The deceased was a foul-mouthed, racist, misogynistic alcoholic, and the afterlife according to Dick is a grim, eternal, inescapable astral plane where the consequence of human misdeeds is an endlessly replaying loop of one’s most terrible memories. In his case, those recollections frequently involve his pedophiliac Uncle Willy, who tortured him in the living world and appears in the next to add on to Dick’s commentary.

See it if On my tripe to nyc July this was a tremendous surprise to see in Queens at a small bar venue. Engulfed from scene one and left altered.

Don't see it if Only fault was lack of supporrt. Actor handles all cues and sound system was poor. The writing was profound and I sat close enough to hear

See it if Well, have strong stomach. It's definitely not a Broadway musical. This is not a feel good song and dance, tragic, intense, dark humor.

Don't see it if You can't handle deeply offensive language and imagry, racial epithets and misogyny. Not a gratuitous word, but sensitive ears beware

See it if You have an extremely dark sense of humor.

Don't see it if You're easily offended.

See it if You like experimental/multi-media pieces, but still want real narrative and acting.

Don't see it if You don't like cursing or sad things.

See it if You dig a deep, deliberative discourse on death, drinking and "dickery!"

See it if A unique and innovative play in very aspect with superb acting costume and props. An absorbing script with constant laugh out loud scenes.

See it if You enjoy edgy, often hilarious multimedia tour de force that explores the dark side of the human condition, viewed from 'the other side'.

Don't see it if You are squeamish about 'spicy' language and subject matter, if not, you'll be riveted.

See it if You want to be truly entertained and fall into the mind of the character presented before you in this one man show.