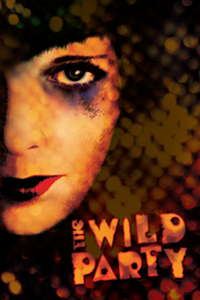 An Encores! Off-Center production, this is the tragic Jazz Age story of party girl Queenie (played by TONY-winner Sutton Foster), one booze-soaked night, and a stranger who offers hope of a less tawdry life.

'The Wild Party' is Andrew Lippa's adaptation of Joseph Moncure March's 1928 searing, narrative poem of the same name. It tells the story of one wild evening in the Manhattan apartment shared by party girl Queenie and Burrs, a vaudeville performer, who are looking to add the spice back into their tumultuous relationship. But their targets prove to be more than simple sexual conquests, and when emotions get involved, the consequences are more tragic than anyone could have imagined. This award-winning musical had its premiere Off-Broadway in 2000, and is being revived this summer at New York City Center as part of its Encores! Off-Center Season.

See it if Sutton Foster and Steven Pasquale were amazing. The whole cast! Great story and music.

Don't see it if you don't like concert version. Although Encores always goes way beyond a simple concert. It's almost a small full stage production.

See it if You are a fan of Lippa's score or Sutton Foster and Steve Pascal.

Don't see it if You dislike the music or don't like adult themes played out on stage.

See it if you love Foster, altho this wasn't an ideal role for her. The hard-edged show is not very welcoming. I wasn't a good guest at the wild party

Don't see it if you like traditional musicals. I was happy to get to see TWP, but I didn't really enjoy it. I felt like I needed a shower afterwards. Read more

See it if you like a little darkness with your musical, enjoy a dash of raunch, & want an original story with strong musical numbers.

Don't see it if you don't enjoy sexuality depicted in your musicals or wants something light hearted.

See it if You are a massive fan of "The Wild Party" and are interested in seeing Lippa compromise his genius musical's structure. If it ain't broke...

Don't see it if You have already seen a great production of the first iteration of this fabulous musical...because this production fell short big time.

Don't see it if you need a strict plot

See it if you love tragedy with your entertaining musicals. Also, if you love Sutton Foster.

Don't see it if you want a no-brainer, fluffy musical, where everything ends happily.

See it if Steven Pasquale. Joaquina Kalukango. Miriam Shor. One of the best theatre albums.

Don't see it if Sutton was miscast. The changes were not for the better.

"You could even say that 'The Wild Party,' which once seemed sweaty without ever feeling warm, has taken on some heat and, more important, a heart. These attributes aren’t quite enough to make the case for Mr. Lippa’s frantic portrait of a fête fatale as a fully satisfying musical...Though everybody loves a good party, watching two hours of other people’s revelry can grow monotonous. This is especially true when you don’t know or care about revelers who strike a single note of sloppy hedonism at the evening’s beginning and then more or less hold it until the sun comes up."
Read more

"It would be hard to imagine a production, let alone one rehearsed and put together in only ten days, that made a better case for the material. This is not a thrown-together staging on a cheap, borrowed set; it is, somehow, a physically beautiful, thoroughly realized, and fully choreographed account of a complicated story...I really have nothing to criticize about this production, except perhaps to say that it sets the bar unreasonably high for future Off-Center seasons."
Read more

"The last time Sutton Foster appeared at Encores,! the show went on to Broadway. That probably won’t be the case with 'The Wild Party.' This shindig’s strictly PG...Silverman’s staging and Sonya Tayeh’s choreography lack energy and raunch."
Read more

"This staging by Leigh Silverman tends to drive so hard it pushes you away. But there are moments that are just right. The best moments come as Queenie, Black, Burrs and Kate blend their voices...The delicious vocal arrangements by Chris Fenwick make these scenes the real life of this 'Party.'"
Read more

"It tends to veer in and out of focus, and some parts are better than others. The production is similarly uneven, often more stagnated than wild. Lippa's rewrites for this production are, to say the least, questionable...Given the piece's demands, it may have needed a longer rehearsal period than the kind afforded by the Off-Center series, and a more intimate venue than City Center. How about an environmental production where the audience feels as if it is part of the party?"
Read more

"Lippa and director Leigh Silverman treat this concert staging not so much like an encore, but a second chance to fix the show's flaws. While this lack of preciousness about one's work is refreshing, the result is less than satisfactory: A dragged-out second act surprisingly devoid of stakes still mars an otherwise solid show. Thankfully, the main attraction remains largely in tact: unforgettable solo performances executed by a talented cast."
Read more

"Leigh Silverman's production doesn't register as loud, fast, or, heaven forefend, 'wild' at all. This is a lullaby with a fervent blues streak...Absent any sort of a thematic or emotional anchor, the songs just lie there snoozing—would-be showstoppers in search of a show...Because we don't know who these people are or how they speak, neither they nor the show becomes anything close to real."
Read more

"The show, as usual, belonged to Sutton Foster, who even when standing to the side and letting her 'guests' have a chance under the spotlight, somehow still managed to be the center of attention, not that she needed to try for that matter, but just watching her glow as she saw others perform was wonderful, her smile saying more than any song could."
Read more