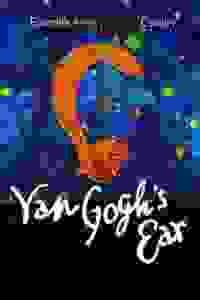 The Ensemble for the Romantic Century presents a theatrical exploration of the Dutch Post-Impressionist painter inspired by Vincent's letters to his brother Theo.

Van Gogh frantically worked on several paintings at a time, experimenting with color and form. Time became his enemy as violent fits of madness and terrifying hallucinations consumed his being. Wrestling a fractured psyche with his determination to paint the beautiful, fragile world he saw, Van Gogh revealed his struggle to his brother Theo. Accompanied by live chamber music, this show brings the tormented creativity of Van Gogh to life.

81
This show will divide audience: some will see as ambitious effort to evoke vg's art through synthesis of words, graphics and music; others will find this to be a pretentious failure

Don't see it if much more successful as a concert than a play; but over time this "tone poem" makes you sense the manic pain behind VG's unique art

See it if you want to get a feel for Van Gogh's tortured life and to see of his works. Projections are great.

Don't see it if you expect more in the way of a play and are satisfied with some classical music. The 2nd Act tends to slow down too much.

See it if if chamber music, operatic arias, & vivid projections of Van Gogh's works are enough to compensate for a shallow portrayal of a complex man

Don't see it if You love Vincent Van Gogh. The actor was excellent but the lines were just depressing. Read more

See it if you want a to see and hear a beautiful blending of chamber music, vocal recital and theater, The staging is exquisite.

Don't see it if you are looking for a traditional play or musical. This may not be for you, Also, if classical music is not your thing.

See it if you enjoy chamber music and opera singing.

Don't see it if you want to delve into the character of van gogh....This show is more about staging, background pictures and music.

See it if you're open to an unusual mixture of drama, projections and music. A fascinating story, amplified by the music and art.

Don't see it if you want straight-forward plot movement and dislike innovative takes on a well-known story.

See it if You want a one man show mixed with a chamber music concert and a lieder recital . ..all excellent , amazing projections too

Don't see it if None of those things appeal to you

"It often exudes an uncanny beauty and emotionalism that evoke the state of hellish pain and holy wonder in which its title character existed. It helps that van Gogh is embodied by the actor Carter Hudson...'Van Gogh’s Ear' can initially come across as too consciously and carefully 'artistic'...But the thoughtfulness that infuses every aspect of Mr. Sanders’s production — and the committed skill of its performers and designers — soon wears down your resistance."
Read more

"The show ties events in the troubled Dutch artist's life to some of the most arresting music of his age. It's less a play with music than it is a concert with elements of theatricality...Hudson entrances us with his observations of light and color, like a badass Bob Ross. Bengali's vibrant projections, all of which are drawn from van Gogh's own paintings, further illustrate his words...A dreamlike (if a bit sleepy) staging...There are few lovelier ways to spend 100 minutes."
Read more

"Offers some stunning musical performances, attractive visuals—and nothing remotely like drama...Wolf's script does very little to illuminate Van Gogh's life...No real attempt has been made to forge a character, and, as played by Hudson, Van Gogh often sounds like an aggrieved 21st-century American millennial...So dramatically pale are these passages that they practically vanish next to the music, which is ravishing throughout...It has its charms—but, really, I'd much rather see a play."
Read more

"If nothing else, the production is a unique exegesis on the creative vision and deteriorating mental health of van Gogh toward the end of his life...The connections among the three art forms that are being presented here are not readily apparent, or at least they weren't to this theatergoer. It does help that Carter Hudson as Vincent and Chad Johnson as Theo manage to humanize the brothers beyond what you might expect from a presentation based on excerpts from letters."
Read more

“There is more emotional weight within eight measures of Debussy's String Quartet in G minor than in Eva Wolf's entire ‘Van Gogh's Ear’ at the Signature Center. Same for the French chansons performed during the play by singers portraying characters intimately associated with Vincent. All of the quotations from Vincent Van Gogh's diaries and letters that make up about half the play's two hour running time fall flat as delivered by the leaden Carter Hudson who moves about as if sleepwalking.”
Read more

"More dramatized concert/multimedia exhibition than traditional play...While aesthetically pleasing, I often found myself drifting away from the story...Nevertheless, it does a great job conveying a sense of the romantic desperation of the haunted character...If you are an aficionado of classical chamber music and might enjoy a dynamic exhibition of Van Gogh's painting, you'll be thoroughly satisfied by this show. But those looking for traditional dramatic structure...may be less satisfied."
Read more

"An ode to the exquisite paintings but minimal insights into the life of Vincent van Gogh...The beauty of the van Gogh art is cleverly projected as backdrop...Wonderful highlights that accessorize the beauty of the music...I’m of the mind that the addition of dialogue between characters might enhance this production as would a shortened presentation...If you are a fan of classical music brilliantly played, then you’ll enjoy the uniqueness and creativity of how it is artfully shared."
Read more

"Beautifully sung, creating mood along with some emotional magic, the show was an effort at giving multi-media resonance to Van Gogh’s life and art...Also noteworthy was the unusually excellent and artful use of David Bengali’s projections, which often showed Van Gogh’s brushwork in close detail juxtaposed against a larger view of that portion of the painting. Fascinating! And that goes for the entire show, as well."
Read more