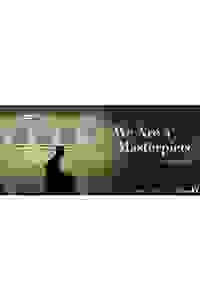 View in admin
We Are A Masterpiece
NYC: East Village
82
Score it Scored!

We Are A Masterpiece NYC Reviews and Tickets

This drama examines the patchwork families which were formed during the AIDS crisis, when friends and co-workers became brothers and mothers, stepping into the holes that their family members left.

When Joan meets John, an unlikely friendship blossoms between them. Seeing he's alone, she invites him into her home. John has been abandoned by his partner and family--in addition to finding solace in Joan--he forms friendships with her daughter and Tom, the janitor at the hospital, as he races to finish a masterpiece and to heal the broken pieces of his heart before he dies.

72
Supporting each other with kindness, Creating a family of choice, The early days of the aids crisis, Choose to remember

See it if You’d like to learn about or recall the 1980s when our friends were dying and we didn’t know why. Too many deaths and funeral fatigue.

Don't see it if You are under 40 and don’t remember... Oh wait, maybe you should.

See it if you believe an earnest drama about the early days of the AIDS epidemic must be seen, even today, if only to help us remember.

Don't see it if you think a play about the "gay cancer"--leavened only slightly by moments of unexpected comedy--might be too depressing. Read more

See it if You are interested in very good productions, this one set in the dawn of the age of AIDS, that's closely observed and truthful.

Don't see it if you can't bear to see the start of a plague that took millions.

Don't see it if Another play about AIDS is not your thing. Read more

See it if you want a though provoking evening. It's beautifully written play that will stay with you. An inspiring evening with an amazing cast!

Don't see it if you want a light evening that doesn't tackle hard issues. Read more

See it if You're interested in a play that examines the early days of the AIDS crisis from a number of different angles.

Don't see it if You dislike depressing shows. There's some wonderful, unexpected humor, but it's still a 3-hour play about a very serious topic. Read more

See it if you are too young to remember the confusing, tragic, early days of HIV when it was called the “gay cancer”.

Don't see it if it’s just too sad to go back to those heartbreaking days; the confusion, the anger, the fear, the homophobia. Read more

See it if you are interested in the history of the AIDS crisis, and want a different view - the very early days in a small town.

Don't see it if you can't sit through long shows, illness and death upset you greatly. Read more

"The production, whose deliberate pacing, scope, and construction make for a Hamlet-length evening, boasts some fun period details...Some of the most emotional parts are the broader, non-character-specific reminders of how horribly people with AIDS were treated during the 80s, but the cast brings an intimate specificity to the individuals impacted...There is a certain kindness...Even characters who are on the wrong side of things don't come across as malicious."
Read more

"The play tells a story of death, friendship, and coping with life and with loss, as it hones in on its characters in a very human and in-depth manner, as the plot rotates from character to character, weaving together and ultimately building toward a powerful climax...Wonderfully directed...While it takes some time for the story to build up, the last few scenes of the play are among the most powerful I've seen in recent productions."
Read more